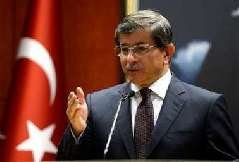 At the summit of foreign ministers of countries NATO- members the Prime Minister of Turkey Ahmet Davutoglu declared the inadmissibility of "illegal annexation" of the Crimea and Ukraine, and called for support for the Crimean Tatars, according to Reuters.

"Ukraine must be supported in order to strengthen its own security and the security of its citizens. But while helping  Ukraine, we should not forget the suffering of the inhabitants of the Crimea. The illegal annexation of the Crimea is unacceptable under any circumstances , " Davutoglu said.

He also said that the support of the Crimean Tatars and the prevention of isolation is crucial under  the  situation in Crimea, said UNIAN.

Before the summit in Antalya,  the Turkish Foreign Minister Mevlut Cavusoglu said that "nothing can justify"  Russia's actions with regard to Ukraine, the Crimea and Georgia.

The Turkish Foreign Ministry called an unacceptable the violation of the rights of the Crimean Tatar population, saying that Turkey is planning to send a mission to the island for informal monitoring of human rights violations in the Crimea.

Harsh statements of the Turkish officials followed after the visit of the  President Vladimir Putin to Armenia, which is described as a ceremony to commemorate the genocide the mass killings of Armenians in the Ottoman Empire in 1915. The Turkish Foreign Ministry and President Recep Tayyip Erdogan also condemned Putin’s words.

"This is not the first time that Russia is using the word "genocide" on this issue. Personally, I am saddened that Putin made this step. What is happening right now in the Ukraine and Crimea, is obvious. They would have to explain it first, and then to use the word "genocide",  said Erdogan.

Following this, Ankara has begun to curtail negotiations on construction of gas pipeline "Turkish Stream", through which Russian gas was supposed to arrive in Europe.