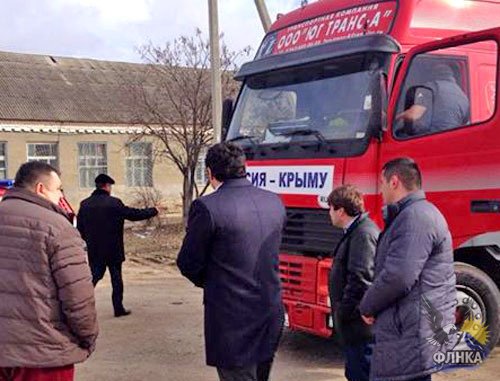 A road train with 80 tons of humanitarian aid, collected in Dagestan for residents of the Crimea, has arrived to the peninsula, said the press service of the Ministry for National Policy of Dagestan. On March 10, the government of the Autonomous Republic of Crimea held a sitting on the distribution of the delivered foodstuffs.

On the way to the Crimea, the column made a stop in the city of Mineralnye Vody to meet members of the Dagestani Diaspora in the Stavropol Territory.

Let us note here that according to Ukrainian media, the peninsula is facing problems with foodstuffs: the demand has gone up causing price growth. The situation is caused by the fact that traders are unable to make purchases in the Ukrainian "mainland", because the peninsula is partially blocked by militaries, the UNIAN reports.

Russians rise in support of Ukraine