Russians rise in support of Ukraine 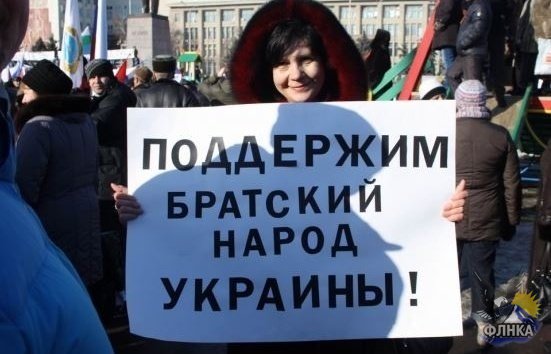 MOSCOW, March 06. /ITAR-TASS/. Moscow Region’s official delegation led by Deputy Chairman of the region’s government Gherman Yelyanyushkin arrived in Crimea to estimate humanitarian aid planned to be provided for twin towns, the Governor’s press office reported on Thursday. The delegation is planning to visit the towns of Sudak, Alushta and Yevpatoria and Krasnogvardeysky locality.

According to Yelyanyushkin, the Moscow Region will give economic and social aid and will consider a contribution to reconstruction of hospitals, schools and other social facilities.

Meanwhile, financial aid for Ukraine is also afoot in the Vologda Region, Speaker of the regional parliament Georgiy Shevtsov told Itar-Tass on Thursday. Funds can be allocated from the regional budget, if there is a clear mechanism and procedure of aid allocation.

"We are ready to accept refugees from Ukraine and provide temporary asylum within the existing legal mechanisms as soon as necessary,” reported the governor’s press office. Residents of Ukraine with Russian citizenship can be assigned status of forced migrants; the rest will have accommodation and work according to the existing quotas.

Job opportunities are also there for Ukrainians in the Kemerovo Region which Governor Aman Tuleyev told Itar-Tass on Thursday the regional government was ready to offer them economically important jobs and partially cover rent costs.

In the meantime, the Republic of Dagestan has taken real action and sent 80 tonnes of humanitarian aid collected all over the region to Crimea where it will be delivered by sea via the port of Kerch.

"We cannot stay aloof when our brotherly nation is in trouble,” said head of the regional government Abdusamad Gamidov.

People’s rallies in support of Ukraine and Russian people living there have gathered dozens of thousands in Moscow, St. Petersburg and Krasnodar since they started on March 2. On March 3-4 events took place in major cities, including those in the regions on the border with Ukraine - Belgorod, Bryansk, Novocherkassk, Rostov-on-Don and many others. On Thursday rallies also took place in Pyatigorsk, Yekaterinburg and on the Yamal Peninsula, there were no disorders, said the police. The largest gathering of about 10,000 came to the streets in Saratov and Nizhny Novgorod.

A motor rally started in the city of Bryansk where car drivers headed for south of the Bryansk region towards the Friendship Monument for a rally to support Ukraine’s Russian-speaking population. The monument was erected by the 30-year anniversary of the victory in World War II in the place where borders of Russia, Ukraine and Belarus meet on the crossing of three roads. Since then it has been a place for the annual festival titled Slavic Unity. The twenty-car rally is to be joined by several more dozens of cars in other major cities of the Bryansk region and then go to the monument located in the neutral zone between two border checkpoints of Bryansk and Chernigov regions.