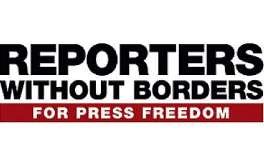 Reporters Without Borders (RSF) appeals to the European Union and to all its member states to use a summit with Turkey in Brussels on 29 November to demand the release of Can Dündar, the editor of the daily Cumhuriyet, and Erdem Gül, his Ankara bureau chief.

Last week, the Istanbul-based Cumhuriyet received one of the Press Freedom Prizes that RSF and TV5 Monde jointly award each year.

European Council President Donald Tusk and the leaders of the individual EU countries are also urged to use the summit to insist on the release of journalists and, more broadly, respect for media freedom as prior conditions for better bilateral relations.

"Cumhuriyet is one of the spearheads of independent journalism in Turkey and Can Dündar is an information hero of which Turkey should be proud,” RSF secretary-general Christophe Deloire said.

"RSF awarded Cumhuriyet its 2015 Press Freedom Prize in the media category in Strasbourg on 17 November. Attacked by President Erdogan in person, Dündar delivered a powerful, profound and courageous address. He is one of the democracy watchdogs that the Turkish authorities are muzzling with increasing violence.”

Dündar said during the award ceremony: "My office has two windows. One gives on to a cemetery. The other gives on to the law courts. These are the two places that journalists visit most”

Dündar and Gül were taken to Silivri high security prison yesterday evening after a judge ordered them detained pending trial. They are facing the possibility of life imprisonment on charges of spying, divulging state secrets and propaganda on behalf of a terrorist organization.

They are to be prosecuted over a story published in late May, together with video and photos, that revived allegations – previously suppressed by the government in February 2014 – that Turkey’s National Intelligence Organization (MIT) delivered arms to rebels in Syria.

RSF is launching a petition for the immediate release of these two journalists.