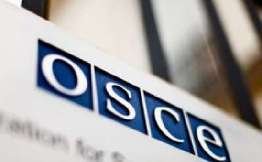 "We, the Heads of Delegation of the OSCE Minsk Group Co-Chair countries – Foreign Minister of the Russian Federation Sergey Lavrov, Secretary of State of the United States John Kerry, State Secretary for European Affairs of France Harlem Desir – remain united in our commitment to mediating a peaceful settlement of the Nagorno-Karabakh conflict”, - reads the joint statement by the heads of delegations of the OSCE Minsk Group co-chairs countries.

"We welcome the upcoming meeting between President of Azerbaijan Ilham Aliyev and President of Armenia Serzh Sargsyan under the auspices of the Minsk Group Co-Chairs. In light of the recent rise in tensions, we appeal to the sides to re-commit themselves to the peaceful resolution of the conflict and dispel any misperceptions that they are not serious about reaching a negotiated settlement. The sides should continue discussions from the Sochi, Wales, and Paris Summits of 2014 on elements of a comprehensive settlement, and should intensify their dialogue in 2016 on the basis of proposals currently under discussion.

With the significant escalation in violence along the Line of Contact and Armenia-Azerbaijan border this year, the status quo has become unsustainable. We especially condemn the use of mortars and other heavy weaponry, and regret deeply the civilian casualties these weapons have caused. There is no military solution to the Nagorno-Karabakh conflict, and there is no justification for the death and injury of innocent civilians. We appeal to the sides in the strongest possible terms to reduce tensions and protect lives. The Co-Chairs have proposed risk-reduction measures that we encourage the sides to adopt, including an OSCE investigation mechanism.

We welcome the progress made by the sides in implementing the data exchange on missing persons under the auspices of the International Committee of the Red Cross (ICRC). We encourage further cooperation with ICRC and must ensure that it has sufficient funding to fully implement this important humanitarian measure. Azerbaijani authorities’ decision to return an Armenian soldier who crossed the Line of Contact and an Armenian civilian who crossed the international border was a helpful humanitarian gesture and consistent with international humanitarian obligations. We urge the sides to return all remaining prisoners in the spirit of the Astrakhan Declaration of October 2010 issued by the Presidents of Armenia, Azerbaijan, and the Russian Federation. There must also be dialogue between Armenians and Azerbaijanis to build trust between neighboring peoples. We encourage the sides to work with the Co-Chairs to support programs that bring together people affected by the conflict.

Over the past year, we have witnessed increasingly vocal attacks on the Co-Chairs and the Minsk Group format. We emphasize that the Minsk Group remains the only accepted format by the sides and has the full confidence of all OSCE participating States. Any attempts to blame the Co-Chairs for setbacks in the negotiation process only mask the primary obstacle to peace - the lack of political will in Armenia and Azerbaijan to reach a negotiated settlement. The Co-Chairs will continue to brief international and regional organizations interested in supporting the Minsk Group process. We reaffirm our readiness to work closely with the sides on achieving our common objective of an enduring peace”, - says the statement.