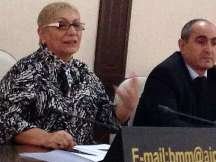 To avoid numerous victims in the accident and fire on the field Guneshli was possible, if the norms of labor protection were fulfilled precisely and the evacuation of oilmen was arranged correctly. These are the conclusions of the working group to investigate the causes of the accident and the fire, created by the Organization of Oilmen Rights’ Protection.

As the head of this organization Mirvari Gahramanli said, after the forecasters warned of a 10-point hurricane wind, according to the rules of labor protection, it was necessary to evacuate a large part of the workforce from the platform.

"Only a few people had to remain on the platform,” said Gahramanli.

As the oilmen remained on the platform after the crash and fire, a command should have been given to gather in the residential block.

Residential units are always designed as resistant to fires and earthquakes. On the platform Gunashli the residential unit also remained intact, and the next day a helicopter landed exactly on the roof of the block. Therefore, the oilmen could wait there until normalization of the weather.

Gahramanli criticized the official reports of the events on the platform.

"Up to now there is no systematic information on the survivors, the dead and the missing," she said.

On the basis of the media information it is known about the rescue of 32 people, the death of 13 people and the missing 18 (taking into account the body found off Turkmenistan on January 29).

Gahramanli pointed to the lack of information on the search. Also missing are three oilmen that fell into the sea from the platform at the field Oil Rocks.

Gahramanli blamed the SOCAR department heads for the loss of lives, saying they did not evacuate the people on time. She also blamed the officials responsible for the safety, including the First Vice President of SOCAR Khoshbakht Yusifzadeh.

"Rovnag Abdullayev is responsible for keeping such irresponsible people on their positions,” stressed Gahramanli.

"The Ministry of Health did not provide psychological aid to the rescued and the family members of the missing ones,” said Gahramanli and questioned the statement of the Ministry of Environment on the absence of damage to the Caspian Sea environment after the oil spill. "By the way, the fire on the field is still ongoing," she said.

Summing up the results of last year, Gahramanli noted that the main problem for the oil industry in terms of human rights was dismissals. The most acute problem exists in the operating company Karasu.

The organization protecting the rights of oilmen as far as possible provides legal assistance to oilmen in the defense of their social and labor rights. In the past, the organization helped oilmen in the conduct of 64 trials and in 21 cases it managed to win. On other cases the trials are going on.

Families of Missing Oilmen Require to Find Their Bodies

Search for Missing Oil Workers Not Yet Yielded Results