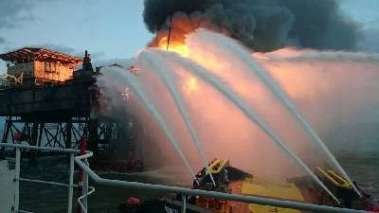 President Ilham Aliyev signed a decree on the establishment of the State Commission in connection with the accident at the platform N10 in the "Guneshli" oil field of the  State Oil Company of Azerbaijan (SOCAR). The document states that on 4 December there was a large fire on this offshore platform. Severe weather conditions and strong gale hampered rescue work at the accident site. However, as a result of  taken measures  32 people were rescued. According to preliminary data  one person died. Search and rescue of missing persons is ongoing. The document does not specify how many people are still missing.

To speed up rescue operations, coordination of relevant government agencies, investigation the  causes of the accident and elimination of its consequences  a state commission headed by Prime Minister Artur Rasizade has been created.

State Commission  was instructed to take steps to provide material assistance to the victims and families of victims, as well as the treatment of injured. Law enforcement agencies were  requested to investigate the cause of the accident and carry out urgent investigative actions.

During observations an empty boat was found about 50 km away to the south of the scene. In this regard, State Maritime Administration informed  the ships located in the area.  The  Investigation Department   for  Serious  Crimes of the General Prosecutor's Office filed a lawsuit under the Article 225.2 (violation of fire safety rules, resulting in serious consequences) of the Criminal Code.  This message also does not specify how many people remain missing. Neither the order  of the president nor the law enforcement agencies reported how many people were on a burning platform.

According to unofficial part of the oilmen on the platform were evacuated in two lifeboats.

Mirvari Gahramanli , the head of the Committee for Protection of Oil Workers Rights previously stated about the possible death of 32 people. According to her, there were 84 people on the platform.  Local media quoted the PA "Azneft"  and reported there were  63 oilmen on the platform at the time of the accident.

Families of Missing Oilmen Require to Find Their Bodies

Search for Missing Oil Workers Not Yet Yielded Results