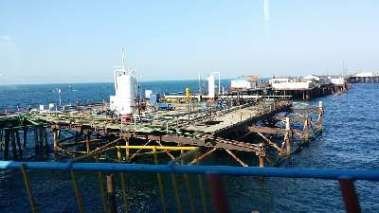 Today at 12:30 an accident occurred on the basis of the five hundred and first NGDU "Oil Rocks". According to  the press service of SOCAR, as a result of hurricane winds, waves washed residential booth.

At the time of the incident there were the driver of the steam unit Javad Khudaverdiev born in 1971, motorists Bahman Jafarov, born in 1961, and Rovshan Mammadov, born in 1974.

Instantly search operations began. Despite the hurricane, rescue operations are carried out by helicopter  of the Ministry of Emergency Situations and fireboats "Whirlwind 9," diving vessel "Avyor" and the tug "Samir Guliyev." While oil is not found. Rescue work does not stop.

According to Turan, in the "Oil Rocks" storms occur periodically , and there were  human victims in the past.

The biggest incident occurred in 1957. Then, as a result of the collapse of the overpass 21 oilmen died, including Michael Kaverochkin, who drilled  the first well in "Oil Rocks".

Four natives of Northern Caucasus wounded in shootout in Moscow