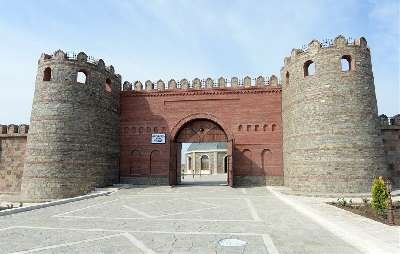 Baku/12.05.14/Turan : At least six people were hospitalized with injuries as a result of the collapse of structures of the historical and architectural museum complex Nakhchivangala.

The incident occurred in Nakhchivan in the area of the ancient fortress on May 10.

The collapse happened in the evening, during a concert next to the museum complex.

The collapsed concrete staircase led to the historic monument, which did not bear the weight of the people.

It is noteworthy that the museum complex was opened just a month ago.

According to the regional correspondent of Turan, 6 wounded were hospitalized in the hospital casualty department of Nakhchivan. The oldest of them is 75 years old and the youngest is 2 years old. They have broken arms and legs, but the morning of May 12 they were all released from hospital.

How many people have suffered is unknown.

The state agencies or NAR and Azerbaijan have not provided official information about the incident. It is also unknown whether the investigation is conducted.