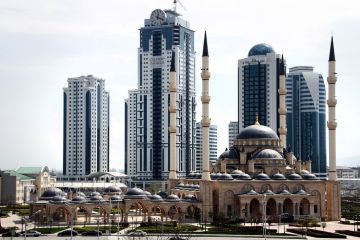 Chechnya strongman Ramzan Kadyrov sought to play down a massive fire that raged at a showcase complex symbolizing the mainly Muslim Russian region's recovery from war, putting the incident down to God's will.

The fire took place at a complex of seven skyscrapers in the centre of Grozny where Kremlin fought two wars against separatists over the past 20 years.

One of the seven skyscrapers in the complex, a 40-storey building, was consumed by huge flames Wednesday evening, and firefighters took seven hours to extinguish the fire.

The regional government said after an emergency meeting late Wednesday evening that the cause of the fire was a short circuit in the air conditioning system on the building's outer wall.

"Only the outer part of the building suffered and not the construction itself," Kadyrov wrote on his official Instagram account that he is using with increasing frequency.

"All necessary measures to preserve it were undertaken. But a fire happens according to the will of the almighty and against HIS will we are powerless," he added.

The increasingly devout Muslim Kadyrov has sought to draw positive publicity for Chechnya with projects like Grozny City despite continuing unrest in the Caucasus.

He accused some people of writing "any kind of rubbish" on the Internet about the consequences of the fire. "Allah be their judge," he commented.

The building hit by the fire is topped by a giant clock and stands 145 metres (475 feet) tall. The clock, which Chechen officials like to boast is one of the biggest in the world, has now stopped, Russian media reports said.

The 2011 unveiling of the apartment complex, which was timed for Kadyrov's 35th birthday, was attended by world famous celebrities including actress Hillary Swank and violinist Vanessa Mae.

But his new apartment did not suffer any damage, Kadyrov's spokesman said Thursday. "Depardieu's apartment is in a completely different building," Alvi Karimov told AFP.

The building has yet to be commissioned and no-one was hurt in the fire.

A former insurgent who prefers sports suits to formal wear, Kadyrov took power in Chechnya after his father, Akhmat Kadyrov, was killed in a bomb attack as he attended a Victory Day concert in the volatile region in 2004.

Azerbaijan: sunset of the opposition and “shake-up” of the authorities