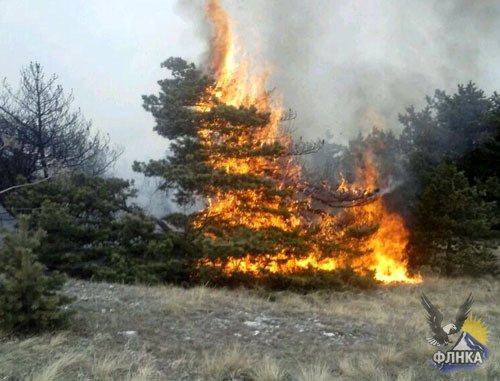 Residents of the Gumbet District, who reported about the forest fire, say that the power agents, who carried out a special operation against militants there, did not allow them to extinguish the fire. If it is not suppressed shortly, there is a danger that the wood can be burned down completely.

Fire-fighting was impossible because of restrictions imposed by power agents, local authorities and officials of the Ministry for Emergencies (MfE) assert. According to rescuers, now there is no danger due to the fire.

The fire occurred during the counterterrorist operation (CTO) regime declared in the district on March 17, while the relevant authorities failed to take timely measures to extinguish the fire, local residents say.

Let us remind you that in the course of the above CTO, according to a source from the republic's law enforcement bodies, two suspected IAF (illegal armed formation) members were killed. The CTO regime was lifted on March 19.

Locals also report that bosses of the firehouse of the Gumbet District received instructions "from above" not to extinguish the fire; therefore, it is burnt down intentionally.