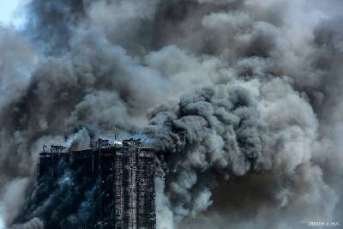 In connection with the fire in the 16-storey building, the head of the company "Global Construction" Miryusif Mahmudov was arested. According to the General Prosecutor's Office, the firm faced the building, using substandard materials. Mahmudov  is accused of misusing its powers, as required by service interests. The specific Article of the charge is not called.–

In connection with today's fire in the 16-storey residential building, which caused the death of 10 people, the authorities are taking preventive measures. Turan has learned from informed sources that in Baku there are 800 residential units covered by  such "flammable" facing. Facing  is of  four kinds, and they burn at a given temperature. The executive branch of the capital has ordered to begin the dismantling of the first floors of all buildings, and have ready trucks with water to extinguish a possible fire. Removing the facing  of  above floors will be made later, after European games.

The investigating authorities will be engaged in the investigation of who ordered  and authorized  facing the buildings by these materials. The perpetrators will be prosecuted.

As for the causes of fire, under the current version the sabotage version is unlikely. In any case, the statement of the public prosecutor that the cause of the fire  is a poor quality cladding, testifies many things.

These works were performed by "Global Construction." Who is  supplier of such facing is  not yet clear. According to some reports, this company was a partner of the World Bank.

However, the interesting thing is who owns the company? According to informed sources, the owner of the company is a husband of the daughter of a very high-ranking officials of Azerbaijan.