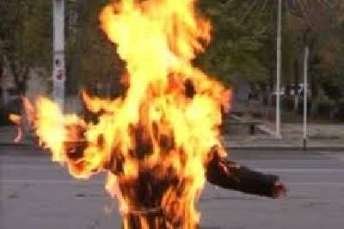 A couple from Sumgait, 39-year-old Elchin Alimuradoglu and his 32-year-old wife Jala Salakhova morning committed self-immolation in front of the Administration of the President.

The spouses doused themselves with gasoline and set on fire in spite of the strict guard in the area. Immediately after the incident, security officers extinguished the flames, but the two people are seriously burned and were taken to the burn center of Hospital No 5.

Location of the incident was cordoned off by police and journalists were not allowed there.

The state of both is characterized as serious.

The first time such an act of protest took place in the past year by a veteran of the Karabakh war Zaur Hasanov, protesting against the demolition of his commercial facility on the outskirts of Baku. As a result of his injuries, he died in hospital a few days later. The authorities paid his family 100,000 manats.