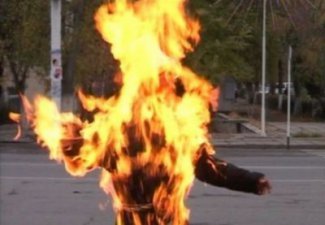 BAKU -- A woman has died in Azerbaijan after an act of self-immolation.

Police in Baku said that 24-year-old Malaka Bayramli passed away in hospital.

Bayramli set herself alight in Baku on January 30.

Police say she committed the act after being rejected by her lover.

It was the fourth self-immolation in Azerbaijan in a month.

Last week, a veteran of the 1990s Karabakh war set himself on fire in central Barda district to protest the actions of local authorities.

The man remains in hospital. In another instance, a man set himself on fire earlier this month for unknown reasons but survived in central Yevlax district.

The death of a Karabakh war veteran who self-immolated in late December in Baku caused a public outcry.

What is behind the suicide of the Karabakh veteran?