What is behind the suicide of the Karabakh veteran? 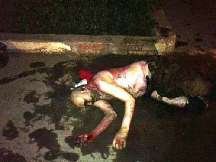 Today in the hospital died a veteran of the Karabakh Won Mirtair Mursalov who committed self-immolation in front of police office of the Jalilabad region.

He was taken to hospital №5 in Baku, but doctors could not save his life, told his brother Mirshamil Mursalov.

Asking about the reason for suicide, brother of the deceased said that Mirtair was  abused by a group of residents. However, despite  repeated appeals to the police about this  there was no answer.  Such bureaucratic indifference caused the  suicide of the participant of Karabakh war.

The Association of veterans of Karabakh told Turan that Mirtair Mursalov  was persecuted by a group of drug dealers of the district. Despite repeated requests to the police after the beating, there was not respond from authorities,  and in protest against the indifference Mursalov  committed self-immolation.

Chairman of Jalilabad branch of the party "Musavat" Ismail Hidayat called Mirtair another victim of bureaucratic indifference and an indicator of the level of corruption and bribery in the region.

Press service of the Interior Ministry and Prosecutor General's Office has not yet commented on the incident.