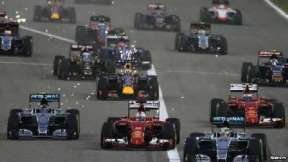 Feb 2 When oil exporter Azerbaijan signed up to host its first ever Formula One Grand Prix this year along an esplanade in its capital, the government promoted it as an opportunity to showcase the country's new confidence.

Now, with the economy in a state of crisis and police in some parts of the country using tear gas to disperse protesters, a sporting extravaganza that attracts the world's super-rich is jarring with the public mood.

"It would be better if the government used this money on local businesses. We will run out of oil one day," Vugar, a manager at a cafe in the capital, Baku, said of the Grand Prix that takes place in June.

Azerbaijan's penchant for lavishly hosting high-profile events - previous examples were the Eurovision Song Contest in 2011 and the inaugural European Games last year - has prompted questions about whether the government is mismanaging the economy.

Political opponents say the events are intended mainly to glorify the government of President Ilham Aliyev, who took over from his father Heydar, a Soviet-era Communist Party boss who ruled until his death in 2003.

Similar questions are being asked in other oil producing countries, from Kazakhstan to Algeria and Venezuela, where the decline in the price of crude to its lowest level in 12 years has slashed budget revenues and hobbled economic growth.

In Azerbaijan's case, economic managers have taken some prudent decisions. The country committed early to putting some oil revenues in a rainy-day fund, which is cushioning the economy now. During the good times, there was investment in important infra-structure, including in roads.

But the International Monetary Fund has for years been saying the government should show more fiscal discipline and do more to develop the non-oil economy by tackling corruption and informal monopolies that stifle competition.

When the Grand Prix comes to Baku on 17-19 June, drivers such as Lewis Hamilton and Sebastian Vettel will race along Oilmen Prospect, on the banks of the Caspian Sea, then loop around Baku's Old City, a United Nations World Heritage Site.

The price listed on the Formula One website for a ticket in the main grandstand over the three-day race weekend is $665, more than twice the average monthly salary in Azerbaijan of 460 manats ($287).

Authorities say the event, broadcast around the world, will help showcase Baku as a modern city with a rich heritage, and promote long-term economic growth.

"A Formula One race will improve our country's image. When we took an obligation to host this event two years ago, we could not forecast such a sharp decline in the oil price," Vakhid Akhmedov, a lawmaker with the ruling party and a member of the parliamentary economic commission, told Reuters.

"But Azerbaijan has enough currency reserves and I don't think there is anything bad about spending some of this money on such an important project," Akhmedov said.

Grand Prix hosts typically pay fees to the sport's commercial rights holder for the privilege of having the race, but contract details are a closely guarded secret. The size of the fees varies, with traditional European venues paying less than newcomers.

Azerbaijan's state budget contains an allocation of 324 million Azeri manats ($202 million) for hosting international sporting events in 2016. Though it does not break the sum down by event, the only ones this year are Formula One and an international chess competition.

The combined sum is about the same as Azerbaijan plans to spend in 2016 on keeping hospitals running for its population of 9.5 million people, according to a finance ministry presentation.

Figures are not available for how much Azerbaijan spent hosting the 2012 Eurovision song contest, staged in a brand new sports arena called Baku Crystal Hall.

According to official information, construction of a stadium where the opening and closing ceremonies for last year's European games were held cost 640 million manats ($400 million). The stadium is now used for football matches.

Hasan Quliyev, a taxi driver in Baku, said the Baku Grand Prix is already causing disruption, because streets in the city centre are closed for renovation to prepare them for the event.

"Our authorities lead us into poverty and spend millions on this event which will probably improve their own image, but not the image of our country," said Quliyev.