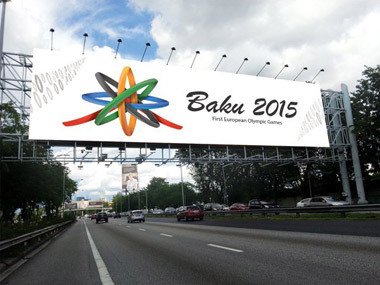 There is more than one year left before the European Olympic Games but Azerbaijan wants to finish preparatory work as early as possible. According to the article published on the website of EurasiaNet.org, as it happened in the run-up to Eurovision Song contest in 2012, the reconstruction of Baku has caused controversy and discontent again.

"A particular point of contention is the planned destruction of a downtown area known as Sovetskaya (Soviet), to be replaced with "green zones”. The makeover will impact some 40,000 people out of Baku’s total population of roughly 2.5 million. And, reminiscent of the Eurovision controversy, many Sovetskaya residents facing displacement claim they are not getting adequate offers of compensation from the government for the flats they will lose,” the author notes.

One of the residents of Sovetskaya Elsever Hamidov told EurasiaNet.org that the government offered him 1,500 manats (over $1,912) per square meter for his 20-square-meter apartment, or a total sum $38,250. Hamidov argues that it is impossible to but even a tiny apartment in Baku with this amount of money. Other residents of the demolished houses say the same.

It is noted in the article that as with Eurovision, local civil society activists intend to use the coming European events as a means to attract international attention to the problems of democracy in Azerbaijan. Currently, they are still formulating their strategy. They expect to launch an awareness campaign by this June. As one of the activists of, the Sing for Democracy campaign during Eurovision Rasul Jafarov said "how to get results and, in the meantime, not find ourselves in prison,”

EurasiaNet notes that seven participants in a March 3 protest against demolition of houses were sentenced to between 15 and 30 days in jail. Relying on arrests – long the favorite tactic for official responses to demonstrations – now has its risks for the government.

According to the article, on May 1 Azerbaijan takes over the presidency of the Committee of Ministers of the Council of Europe, the chief European body for human-rights monitoring. European Union officials in March criticized Azerbaijan’s prosecution of imprisoned opposition leaders Ilgar Mammadov and Tofiq Yaqublu and said that it contradicts Azerbaijan’s international commitments as a member of the Council of Europe.

There are reasons to expect that outside scrutiny of Baku’s practices will intensify in the months to come. Several trends have already caught the eye of watchdog groups. Most worrisome, over the past two months, suicides and suicide attempts have become a form of protest against corruption, socio-economic woes or perceived rights violations.

That overall picture makes the discord over Sovetskaya a "risky” situation for the government, commented political analyst Elhan Shahinoglu, director of the independent Atlas research center in Baku. "If the demands of the people will be satisfied, it could create a precedent for ‘the government’s weakness’ and inspire other vulnerable social groups to protest,” he said.

According to him, this situation will create a headache for the Azerbaijani government for some time.

EurasiaNet notes that the hosting of the European Games, to be held in late June of 2015, will cost $1.25 billion.