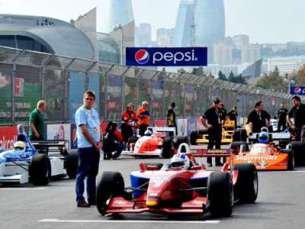 The competition of Formula 1 Qrand Prix will be held in Baku for 10 years. These are the terms of the contract signed by the representatives of Azerbaijan. This was reported by the Azerbaijani service of Radio BBC, referring to the official information of the competition owner, the company FOM.

Until now the conditions of the contract between FOM and the Baku City Circuit, organizing the racing, were not disclosed. Also kept secret is the amount that the Azerbaijani side will pay for the right to host the competition. However, BBC found that only in 2016, Azerbaijan will pay 34 million dollars and this amount will annually increase by 10%.

In addition, the organization and conduct of the competitions will require Azerbaijan to pay 80-90 million dollars, says an expert in this matter Christian Sylt.

In turn, the Minister of Sports and Youth Azad Rahimov said that only on the repair of roads, which will be used for the race, 12 million AZN will be spent, and 5 million manats will be spent on operating expenses, seminars, events, salaries and others.

On the BBC inquiry about sources of funding, the organizers said they hope for sponsors and ticket sales.

According to official documents, the state budget of Azerbaijan presumes 324 million AZN to host international competitions.

The authorities' plans to conduct such expensive events have long been causing criticism of the public and politicians. Thus, the leader of the Popular Front Party Ali Kerimli on his Facebook page writes with irony, that Formula 1 is seemingly the very anti-crisis program of the government, so much advertised by the authorities.

"All these costs will take place on the background of the closure of 100 thousand jobs, unpaid loans by 2.5 million citizens, and a constant rise in prices. Do we need such a senseless, wasteful, and corrupt government?" writes Kerimli.