Mogherini: Human rights are always a key topic of our discussions 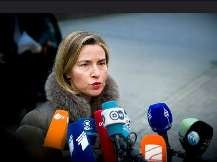 (The vice-president of the European Commission Madam Federica Mogherini on the eve of her visit to Baku gave an interview to Turan agency).

Question: Dear Madam Mogherini, Azerbaycani authorities say that they are not happy with the Eastern Partnership program and would like to establish direct cooperation with EU on strategic directions.

Do you think it is possible? If yes how you imagine such collaboration? Does it mean that EP program failed in Azerbaijan?

Answer:The Eastern Partnership is the framework for the EU's relations with six countries including Azerbaijan. It is a framework which facilitates direct bilateral cooperation as well as multilateral cooperation between the EU and all six Eastern partners. Azerbaijan participates in both the bilateral and the multilateral tracks of the Eastern Partnership.On the bilateral side, we have been looking to upgrade our relations for some time now, developing our relations to their full potential through a new agreement. Consultations towards this are ongoing and I believe that we are able to discuss soon with the EU Member States on the launch of formal negotiations. A new bilateral agreement can further develop our relationship, which would be a positive step.

Question: Azerbaijan government many times declared that is ready to cooperation in economy? Not in political issues.  At the same time representatives of Baku repeat that Europe is in deep crisis, there islamophobia, corruption, no human values, etc.Do you agree with such estimations? What is the reason that Azerbaijan tries to avoid political cooperation?

Answer: I think that the agreement proposed by Azerbaijan to the EU in May of last year signals a turning point in terms of our cooperation on political issues. This proposal includes provisions in the political as well as the economic sphere, and this is certainly an aspect of our cooperation that we are hoping to further enrich in the agreement.

When it comes to the situation in Europe, it is true that we are currently facing a number of challenges. Wars, unemployment, and climate change are making living conditions so difficult that many decide to seek a better life in Europe, even at the risk of their lives. The scale of these movements of people represents first of all a human tragedy for all those involved. It also presents a challenge to the EU and beyond. We are working on comprehensive and sustainable solutions: there is no magic solution, but a complex work involving our internal and external policies, in partnership with many other countries and actors on the regional and global level.

Europe is rightly proud of its diversity and of the respect of human rights, and these are among our core values. It would be wrong to say that Europe is rife with islamophobia. Many Muslims continue to call Europe home, and Islam is also an important part of European culture. The increase of islamophobia, of anti-Semitism and nationalist tendencies in some parts of Europe is a serious problem that needs to be faced, but it shouldn’t detract from the vast majority of Europeans who stand for our multiculturalism and our deep values including, for example, freedom of religion.

Question: Serious violations of human rights, democracy and freedoms in Azerbaijan are not a secret. EU leadership many times criticized Baku for the problem of political prisoners calling to release them. However situation did not improve and only worsens.Do you plan to discuss these issues during your visit to Baku? What is the position of the EU concerning those problems and do you plan to meet with any representatives of political prisoners or their families while being in Azerbaijan?

Answer: As I told you, respect for human rights is a fundamental value of the EU, which is reflected not only in our internal EU legislation, but also in our foreign policy. The protection, promotion and respect for human rights is at the core of our engagement with all of our partner countries, and Azerbaijan is no exception. Regardless of the country I am in, I always discuss human rights issues or individual cases of concern with the national authorities, parliamentarians, and representatives of civil society organisations. When it comes to Azerbaijan, human rights are always a key topic of our discussions, whether in Brussels or through our Ambassador in Baku or the EU Special Representative. Human rights are also on the agenda of my visit in Baku, where I will meet the representatives of authorities, but also civil society.

Answer: The European Union is working to diversify its energy sources by receiving supplies from a range of countries around the world. We are the largest energy importer in the world and therefore the infrastructure which leads into the EU is as important as the infrastructure within our own borders. Azerbaijan, with its rich natural resources, is already a significant and reliable supplier of energy to the European Union and we expect that role to become even more important with the completion of the Southern Gas Corridor. This project is a key priority for the European Union – a priority that we remain firmly committed to - and we are working actively to remove any obstacles that could hinder the timely completion of the project. During my visit to Baku, I will participate in the second Southern Gas Corridor Advisory Council Ministerial alongside my colleague Maroš Šefčovič (Vice-President of the European Commission for Energy Union).

Question:  The problem of security of Azerbaijan is very important taking into consideration of Karabakh conflict, war in Syria and involving there our nearest neighbours – Turkey, Iran and Russia.What can be a contribution of the EU into the protection of Azerbaijan from these potential threats?  What political, economic and other tools you may suggest?

Answer: First of all, we are working every single day to try to build peace in Syria and to solve the conflicts in our region.In November last year, the EU completed its review of the European Neighbourhood Policy (ENP). The review followed broad consultations with the EU Member States, our six partner countries, international organisations, civil society and academia and, as a result, now includes a much-needed security element. The EU and its partners face many challenges, both within our own borders and beyond. The inclusion of security into the ENP reflects the situation we are faced with, namely that we are confronted with global threats that have to be tackled not by individual countries, but by the international community together. There are many security-related issues that the EU and Azerbaijan are discussing and will discuss further in the future, including working together on counter-terrorism, improving border security, developing anti-radicalisation policies and combatting corruption. The revised ENP looks to find ways of strengthening the resilience of the EU’s partner countries, including Azerbaijan. In fact, increased resilience of the EU’s six partners in its eastern neighbourhood through increased cooperation across four broad areas was also one of the key developments that came out of the most recent Eastern Partnership Summit in Riga last May. So we recognise that security is a crucial element in the EU’s relations with its neighbours.

When it comes to the Nagorno Karabakh conflict, the EU supports, including through our Special Representative Herbert Salber, the efforts of the Co-Chairs of the Minsk Group to find a sustainable political solution. What we need is a de-escalation of rhetoric and tensions on the ground, so as to contribute to an improved environment and therefore enable the intensification of talks. The populations need to be prepared for peace. We stand ready, as we always have done, to complement the OSCE Minsk Group’s efforts through further support for peace-building activities and people-to-people contacts.

Mammadyarov Calls Conditions for Partnership between Azerbaijan and EU