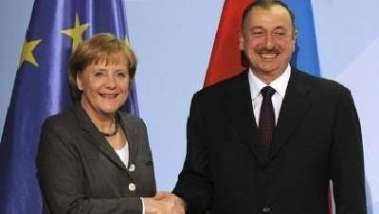 The Azerbaijani President Ilham Aliyev is going to Berlin for a working visit to discuss issues of bilateral relations and cooperation between Azerbaijan and the EU in the framework of the Eastern Partnership.

This became known after the announcement from Human Rights Watch, which called on German Chancellor Angela Merkel to raise the issue of releasing political prisoners and human rights in general at her meeting with Aliyev.

The last time Ilham Aliyev made a working visit to Germany and met with Merkel on February 4, 2010, when the priority was the issue of energy security and the Eastern Partnership.

Then Aliyev said that Azerbaijan is experiencing a period of modernization and needs German technology and is ready to contribute to the issues of energy security of Europe. He also said that Azerbaijan joined the program Eastern Partnership and it will carry out reforms in various fields.

After Aliyev’s reelection for a third term as President, Angela Merkel in her congratulatory message expressed confidence that Azerbaijan will be able to fully exploit the potential of close cooperation with the European Union in the framework of Eastern Partnership.

She wished Aliyev success in building the rule of law and democratic society. "Germany is ready to be a reliable partner, as it has been so far, to support Azerbaijan in this direction," said Merkel.

At the end of December 2013 Aliyev congratulated Merkel’s re-election as Chancellor and expressed confidence in further successful continuation of mutually beneficial cooperation both bilaterally and in the framework of Eastern Partnership of the European Union.