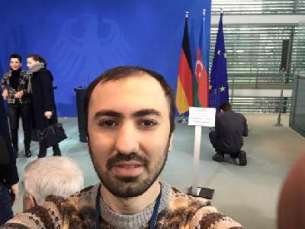 On Wednesday,  at about 15:00, Baku time,  in Berlin in front of the office of Angela Merkel was held to protest of  human rights groups and journalists. At this time, Merkel was having a meeting with Azerbaijani President Ilham Aliyev.

Participants of the rally demanded the release of imprisoned journalists and bloggers in Azerbaijan.

"We call on President Ilham Aliyev to admit finally, freedom of speech and of the press in his country. In Azerbaijan, the authorities carry out an unprecedented repression against critical voices. Today, in jails   are at least 12 journalists and bloggers, including investigative journalist Khadija Ismailova," reads  the   announcement the rally organizers.

During the protests, the participants raised the portraits of the arrested journalists and human rights activists in Azerbaijan, as well as slogans calling for Aliyev’s leaving, and the coming of democracy.