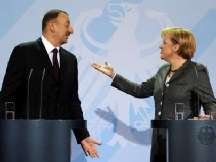 In a staggering crackdown on critical voices, Azerbaijani authorities arrested and imprisoned more than 30 government critics in 2014 alone. The country has also adopted legislative changes and other restrictive measures to virtually close space for independent groups.

"Merkel should not miss this opportunity to urge Azerbaijan’s president, in public and in private, to end this attack on human rights” said Hugh Williamson, Europe and Central Asia director at Human Rights Watch. "The charges against these activists are politically motivated. Merkel could make a difference in securing their freedom.”

Over the past year, the Azerbaijani government used a range of bogus criminal charges, including narcotics and weapons possession, tax evasion, hooliganism, incitement, and even treason, to convict or imprison at least 34 human rights defenders, political and civil activists, journalists, and bloggers, prompting others to flee the country or go into hiding.

Following prosecutors’ requests, courts have frozen the bank accounts of at least 50 nongovernmental groups and in some cases accounts of staff, as part of ongoing criminal investigations against several foreign donors. As a result, at least three of the country’s most established human rights groups have been forced to close, and numerous others had to halt operations.

Against the backdrop of the increasing crackdown, Azerbaijan is preparing to host the first European Games, a mega-sporting event intended to boost the country’s international image. This multi-discipline competition involving national teams from European countries will be staged for the first time this year, in Baku from June 12 to 28.

Merkel should make clear that Germany will not send a high-level government delegation to the European Games unless activists behind bars are freed, Human Rights Watch said.

"President Aliyev is seeking a greater legitimacy by meeting the world leaders and hosting mega sporting events,” Williamson said. "Merkel should send a clear message that closer political and economic ties with Europe are directly linked to Azerbaijan’s release of unjustly jailed journalists and human rights advocates and respect for fundamental human rights.”