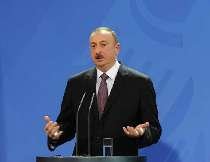 «How can the freedom of the press in Azerbaijan be restored so that your rating is high at the same time?" This question was asked at Ilham Aliyev’s press conference in Berlin.

"With my rating there is no problem, according to the polls, it is close to 90%.

This is due to the ongoing reforms in Azerbaijan.

With regard to freedom, I can say that Azerbaijan has all the guarantees of freedom. 100% guaranteed is freedom of speech. In Azerbaijan, there is no limit to the Internet, there is no censorship. The number of users is close to 75%," said Aliyev.

"The same is on the issue of freedom of assembly. Azerbaijan regularly hosts meetings of various political groups and no restrictions are introduced. In general, in recent years, Azerbaijan has great development associated with democracy. This, of course, is very important for us, as I am absolutely certain that political reforms should be carried out in parallel with economic reforms. Only in this case the country can achieve sustainable success," said Aliyev.

Answering the question of whether the authorities are willing to cooperate with the media and critics of the government, Aliyev said: "Of course, as Azerbaijan since 2001 is a member of the Council of Europe, it on time and with honor fulfills all its obligations to the Council of Europe."

He further claimed that "in Azerbaijan for critical opinion, generally no one is followed and no one is arrested."

Merkel, in turn, bypassed direct assessments of the situation in Azerbaijan, noting that democracy and legal state are one of the important factors of bilateral relations. "We exchanged views about this. Naturally, we also marked some critical aspects related to human rights. I think that we are unanimous with the President of Azerbaijan in the desire to intensify cooperation and strengthen bilateral ties. True, there are differences of opinion on certain issues and that's fine," continued Merkel.

Referring to economic cooperation, she said that the trade turnover with Azerbaijan is 2.5 billion Euros. "I believe that we can work together to restore infrastructure in Azerbaijan. We can also make a contribution to the diversification of the economy in Azerbaijan," said Merkel.