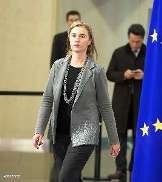 Visits of the two high-ranking European politicians - Vice-President of the European Commission Federica Mogherini and the chairman of the PACE Pedro Agramunt in Baku at the junction of February and March took place at difficult times for Azerbaijan when the country faced serious additional challenges, especially with the financial crisis.

In the words of chess, President Ilham Aliyev received European visitors in a weak position, marked by the double fall in GDP, rising unemployment, poverty, and most importantly lost the social advances that have been achieved through the fabulous incomes in the period of high oil prices.

Western politicians are aware of the problems that faced the official Baku, and are well aware of vulnerabilities  of the regime,  primarily finance deficit, required to maintain the relative internal growth and stability. And the current visit can be regarded as probing the ground for future actions.

This is observed in statements of Mogherini, who in an interview with Turan on the eve of the visit made it clear that the topic of human rights and democracy will be part of future negotiations with Baku, which traditionally prefers to speak more about cooperation in the energy sphere in an isolated form, without linking it to other issues of bilateral relationship.

On the eve of the visit, to which Baku carefully prepared, it was obvious that Aliyev's administration is not ready for a comprehensive approach addressing the European integration problems, which was launched in 1996 with the signing of an agreement "On Partnership and Cooperation between the EU and Azerbaijan." The regime, which successfully played on the energy security of Europe, managed to  regulate all other areas of cooperation and serve the country's democratization process.

On the eve of the visit of Mogherini  the society witnessed hypocritical policy towards the EU. Deputy Foreign Minister Mahmud Mammadguliyev said that Azerbaijan has started preliminary discussions on the prospects of cooperation with the European Union, without waiting for the EU's mandate for negotiations on a new agreement,  and his counterpart Araz Azimov made a statement on behalf of the Government that Azerbaijan does not going to join the EU and does not set such a goal. Foreign Minister Elmar Mammadyarov spoke about the readiness to sign not legally binding agreement on strategic modernization, which he brought to Riga in May 2015 and  with which he disappeared,

As can be seen, on the eve of the visit of high-ranking Europeans Aliyev’s administration was not ready to negotiate with the EU on real integration, which most of the Azerbaijani society waits for after the fall of the Soviet regime and the restoration of independence.

However, the EU still makes it clear that the launch of the agreement on strategic modernization of Azerbaijan, which was frozen by official Baku during the Riga summit of the Eastern Partnership as ever,  under a deep economic crisis that has  covered Azerbaijan. In Europe, believe that the crisis and the new challenges faced by Aliyev's administration, official Baku will make pragmatic and constructive in the new realities.

"My high-level talks gave the opportunity to feel the wind of change, after Azerbaijan faced a number of challenges," said Agramunt, who cannot be called an opponent of the authoritarian regime.

The conclusions arrived at by Agramunt after a meeting with the President, the Speaker and the Foreign Ministry said that "these changes have wider energy issues and human rights, and include issues of the financial crisis, the need to attract foreign investors through the rule of law and transparency, and it's all on the background of sensitive geopolitical situation, which turned out to Azerbaijan ".

Of the total of both the speeches of European politicians can make a cautious conclusion that Aliyev's administration is now more ready to compromise than ever, and especially in the field of human rights and freedoms. PACE President noted that he had received assurances from the authorities about the readiness of cooperation with the Council of Europe Secretary-General under Article 52 minutes for the effective application of the European Convention on Human Rights.

The final visit of Mogherini phrase that the EU believes that the path to long-term development and prosperity is through an open society and respect for freedoms, also revealing in that regard, a letter was sent to President Aliyev and future cooperation is seen under what conditions.

And yet, as it became known from Mogherini, Brussels is working on a new comprehensive agreement on strategic partnership. And when you consider that in what is a weak position mode in Azerbaijan, it is not difficult to foresee that the terms and conditions will be much tougher than it was provided for the previous document, emasculated year ago Aliyev administration to nothing meaningful document.

Aliyev weakens criticism of the opposition and the West