Aliyev weakens criticism of the opposition and the West 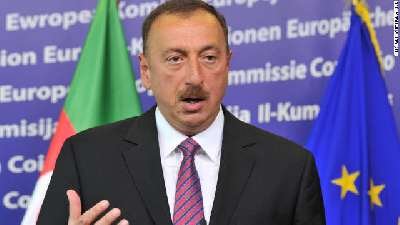 Speech by the President Ilham Aliyev at the meeting of the government on July 18 showed external concerns of the regime on the eve of the presidential elections, the main directions of which were the western and northern areas of foreign policy vector of Azerbaijan.

It is noteworthy that this time, Aliyev distanced from the traditional frontal criticism of opponents of the country, focusing attention and anger on the international opposition to the regime. Recently, on June 7 at the New Azerbaijan Party’s Congress, and then on July 3, at the meeting with staff of the Ministry of Internal Affairs, president labeled as traitors and renegades the representatives of the national opposition camp.

In his speech before the members of the current government, he said nothing particular against political opponents. The reason could be two factors: either the president was made clear that he crossed a line, what caused a strong external stimulation, or the power realized the large scale of the protesting moods on the eve of the election campaign. It is possible that both of these factors have led to an adjustment of the president's speech.

Interestingly, Aliyev did not pay any attention to the hearings of the Helsinki Committee of the U.S. Congress the theme of which is "The Problem Partner: The growing authoritarianism in Azerbaijan", which his supporters mention as a failure of the opposition and the triumph of political will of the Azerbaijani government. Probably this time, the United States, as well as national opposition, was not in the subject.

The main subject of criticism has become Western institutions like the European Parliament, the European Commission in the face of the individual pro-Armenian and biased, and hostile, "dirty" European politicians.

By criticizing some part of the European political elite, Aliyev paid special attention to relations with the European Union, making it clear that Azerbaijan is committed to expanding the strategic partnership between the EU. In this gives reason to believe because in his speech president did not mention Azerbaijan's position in the CIS, an organization where the leading role plays Russia. This may indicate the desire of Baku to increase the distance between the two countries, but the preservation and protection of the security zone regime from possible unpredictable actions of the Kremlin. This is evidenced by the nervous reaction of Aliyev to the information on the reduction of military cooperation with Russia, and the transition to a war fo oting, leading to the pro-US Israel.

Both comments by Aliyev about the European Union and Russia can testify that three months before the election the official Baku could not gain the desired support in Brussels and Moscow, and this uncertain situation has caused particular irritation and creates uncertainty about the future. Baku is trying to break out of the isolation in which it has been since last year, significantly spoiled relations with the USA, EU, Russia, Turkey, Iran, and even neighboring Georgia.

The situation in the home front is not better. The President focused on two factors that have an impact on the mood of the average man: the social aspect of the Karabakh problem. The contradictory socio-economic aspect of the president's speech shows that despite economic growth which has not analogue in the world, low welfare still remains the "Achilles' heel" of the regime. It is not by chance that the president, referring to the size of salaries and pensions, mentioned not the national currency, but euros and dollars, trying to create a more impressive numbers - the average salary and pension is 540 and $160, respectively. In manta terms, it means 420 and 125 manat; what means also many millions of voters dissatisfied with the high cost of living.

Glorification of military power of the Azerbaijani army by the president also did not inspire confidence. The parade in Baku on June 26, which Aliyev mentioned as an event, inspiring fear on the Armenians, did not present the best examples of Soviet technology. So, millions of voters are able to make a conclusion that the Azerbaijani army does not have any miracle weapon, and is armed with the same weapon as the Armenians.

On the whole speech, Ilham Aliyev’s speech can be regarded as the continuation of a series of pre-election speeches, but with some correction - distancing from the general criticism of the West, observed in recent months, and bypassing the obstruction of political opponents, with whom he is to start fighting just in the near future. Methods and conditions of this struggle will be the main dominates of the near future. So far, the situation continues to be controversial, and the quote from the President's speech: "We are on our way" testifies it.