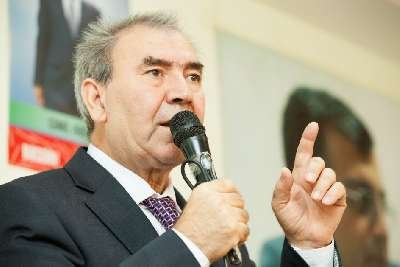 Baku/06.02.14/Turan : "Ilham Aliyev has repeatedly predicted the end of the opposition, but his predictions never come true, and now his own end is approaching," said Jamil Hasanli , the head of the National Council, commenting on Aliyev’s yesterday's speech.

Aliyev should better expressed his attitude to the 26 facts of suicide attempts , including the self-immolation of citizens of Azerbaijan over the last month protesting against injustice.

"The president of the country , where a war veteran burns himself , has no right to make grandiloquent speeches. Ilham Aliyev is Russian-speaking and does not understand the meaning of the word "rezalet" (shame.) To be disgraced in the eyes of the people is when you build for your child villas in Dubai for 75 million dollars. What is a real shame became known when information about the wealth of the family in the Virgin Islands was disclosed.

The biggest shame is a transference by a man calling himself "a president" profitable areas - gold mines , telecommunications companies , banks, etc. to the names of his loved ones.

For two years the whole world is talking about this disgrace and is writing about it in the most authoritative reports," said Hasanli. In the presidential election not the opposition ,but Ilham Aliyev was disgraced, who has not issued a declaration of income. He became a hero of satirical programs in international TV channels. His hasty inauguration the time of which was concealed from the local and international community also became a shame.

"The elections have shown that Aliyev has no connection with the people, and he usurped power by violent means. He is not elected by the people, he was elected by "the reference of CEC," said Hasanli, recalling that the observation mission of the OSCE ODIHR revealed serious shortcomings in counting votes for 58 % of polling stations.

However, Hasanli said that the democratic forces will not allow the country slip to a despotic regime , like the North Korean dictatorship.

"Azerbaijan has to sign and will sign the Association Agreement with the EU, it must and will become a WTO member.

Neither Ilham Aliyev , nor anyone else is able to leave the country beyond global processes," concluded Hasanli.

According to the pro-government exit-poll, Ilham Aliyev wins 83 %