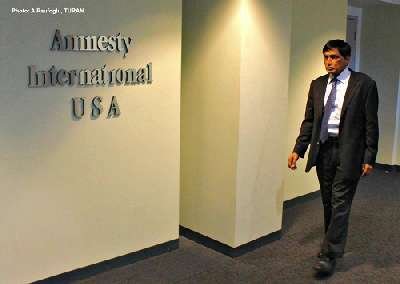 T. Kumar, International Advocacy Director at the Amnesty International USA, believes thatthe failure of the internationalcommunity to challenge the official explanation of government backed campaigns against individual journalists in Azerbaijan, not only has allowed Azeri leaders to get away with its media crackdown, but also has contributed to the growth of total repression at home and spread fear among the dissidents abroad.

In an interview with TURAN’s Washington correspondent, Mr. Kumar, who last year testified at the U.S. Congressional hearing dedicated to the case of investigative journalist Khadija Ismayilova, said, he was "shocked” by learning about the Azeri government’s long-lasting creeping war on a female journalist. Now, he said, it should be all about keeping up the publicity, keeping Khadija’s issue alive, knocking on lots and lots of doors until she and other independent voices are freed...

Question: During you Congressional testimony in December you mentioned that Azerbaijan repeatedly crossed red lines without facing a proper international pressure. Was there any particular case in your mind, or you were referring to the arrests of journalist, political activists?

Answer: We, as an international human rights organization, have been working in a number of countries around the world for about 5-6 decades. And thereality comes across the situation where governments go beneath certain standards –they torture, sometimes even kill their people.

In Azerbaijan, the first read line that we highlighted was the government’s efforts to threaten journalist Khadija [Ismayil] to keep her silent. When she refused, they secretly tape-recorded her private time with her boyfriend and used it as a tool to blackmail her to keep her mouth cut short.

When she did not give up, they published the tape. That, for me, and for human rights activists across the world, was something that they've crossed the red line... And maybe for them, crossing a red line is fine. But to my surprise, the international community didn't use its pressure. They didn't take this as an issue.Neither the U.S. State Department, where there is a special office of Global Women's Issues, not the Congress, where women's issues usually come to the top of the list, no one even have raised Khadija’s issue... It should be made clear back then that the Azeri government’s attacking on a female journalist in this ugly way was unacceptable. Even criminals should not be treated like this. And the government should be stopped when it crossed the line.

Question: As you know, Khadija is currently imprisoned, and the RFE/RL's Azerbaijani office, where she used to work, was also shut down. In your opinion, had the government faced a strong international pushback on the bogus video recording against Khadija in 2012, none of these would have happened today. Is that right?

Answer: It's something that the international community and the U.S. kept quiet. They should have raised their strong voice back then and make a big deal out of it! The government of Azerbaijan must have understood that they couldn't come this far…

Question: Where is the country heading now with its allegedly, almost 100 political activists in prison and ongoing crackdown against western organizations?

Answer: The country has been going down the hill in terms of human rights abuses, silencing the critics, abusing and blackmailing them.But what is missing here is lack of international reactions. That’s where the problems start. I mean, yes, countries do these things, but when they’re left alone with their violations, that's where it becomes even harder and harder. And that's why we have to stand up…

Question: Why is it missing in the case of Azerbaijan?

Answer: It's all about strategic, economic interests, and global war on terror - they all played into that situation. Of course, these issues are important, but that doesn't mean we can close our eyes on human rights violations and look at other ways, while situation goes even worse.

Answer: Human rights violations have different levels. Here it has gone to pretty intolerable level. Even if there were some sort of interests, benefits that governments may achieve by turning their blind eyes on human rights, there are certain red lines and standards that they should maintain. That should concern all of us, every politician, including the Congress members here in Washington.

Question: The Azerbaijani government has been telling its people that they don't receive any message or concern from the western leaders when it comes to the issue of political prisoners. On the other hand, western officials keep referring to their quiet diplomacy. How to prove the existence of such diplomacy since there is no a single, sufficient result of it?

Answer: Diplomacy has two ways to address the problems: one is quiet, which sometimes works, and the other one is public. If the quiet diplomacy doesn't work, then you have to go public.

Not only by speaking, but also using international institutions, such as OSCE, UN systems to go after that country. In Azerbaijan's case, we don't even know if there is actually a private diplomacy. Yes, we trust the U.S. government and other states when they say that they use it and raise the human rights issues - maybe, they do, since they sometimes issue statements – but unfortunately that's all they do, nothing else. The public one though, should be held from the very high level. For example, President Obama should speak about human rights in Azerbaijan – even just with one sentence, by saying that ‘we're concerned about deteriorating human rights situation in Azerbaijan.’The President should say it publicly and even while the Azerbaijani President is present. That's all we want.

If such statement being said at the highest level in front of the Azeri leadership,that would work. Otherwise, then the international community should take it to the UN Human Rights Council to see what tactics are available. There are number of technics that the UN can use to put pressure on the Azerbaijani government to ensure that they don't cross certain lines.

Question: During your discussions with the US government officials, do you feel that they pursue a single strategy towards Azerbaijan, or there are a multiple voices here as well?

Answer: Any issue can be more than one voice. So, they have different voices. Some want to maintain close relationship because of anti-terrorism cooperation, while others speak about oil, and some are concerned about human rights. But there should be a balance. What we see is that human rights issue is being sidelined and other interests are being promoted the expense of human rights. That is wrong and should be changed.

Question: Amnesty International has been closely monitoring many states with fragile democracy across the globe. What countries come to your mind first, when you think about Azerbaijan these days?

Answer: It's very difficult to compare one country to another. But one think I can tell you is that Azerbaijan has already reached the crisis point. Because of the government’s treatment and violence that is being used towards its people who are opposing it.

Question: How does the international community normally react when the countries reach that crisis level?

Answer: First is public pressure, then UN multilateral avenues to find solutions and more effective tools, and then comes sanctions. Even Muammar was like that. Downgrading their economic and political relationship. So, you kind of isolate that country by saying that ‘you're not accepted in the community of the nations.’ That's very important that democratic countries act professionally.  I think the things like videotaping a female journalist are something that could cause such results immediately. It was the biggest mistake that the international community didn’t react when Khadija was videotaped. And we don't even know how many similar ugly things the Azerbaijani government has been doing since then.

Question: What would be your messages to the Azeri government and the people of Azerbaijan?

Answer: From the human rights point of view, here is my message to the Azerbaijani government: It's all about your own people. We are talking about your children, not our relatives. It's you who treat them badly. If you treat them well, at least, not treat them bad, then there is no word for us -- we will never interfere.

When you're not treating your children, abusing them for your own political reasons, that's when we come into play.

We hope that the Baku government will take this as an opportunity to reveal the practices there to see why these people should be in prison.

For people of Azerbaijan, my message is that, you have the moral responsibility to be the people of your country. They should stand firm in principles, in terms of solidarity. Imagine that people that are being humiliatedinside the prisons are one of your family members. How would you react?  So we want you to react like that:  In a passive, none-violent way, quietly resist these practices. Don't mix politics here; it's purely on human dissents. How would you behave,if your own wife and daughter were being treated like this? How would you react? React like that!

At least, trap the government to stop practicing this type of practices – they are dangerous, they are cheap and meaningless.

One thing also surprises me is that, I wonder, if the government leaders in Baku knew about all the blackmailing that had been happening against Khadija and others? Because they also have wives, children and daughters, they should know that such things are unacceptable and don’t take too long before they come to bite them...

So, my message to Baku is open up, don't be defensive! Don't think this is about regime change, no, that's not danger for human rights. Our issue is protecting them and giving the basic freedoms to the people.

For the people of Azerbaijan, please stand with solidarity as one of your family members have gone through the same difficulty, because at one point, it will come after you...

Question: As President IlhamAliyevis expected to attend Washington Nuclear Summit next month, do you think, it will change anything domestically, or he shouldn't be invited here at the first place?

Answer: The invitation that was sent to President Aliyevis understandable given that it's an international nuclear summit. But now that he is coming, we should take this advantage to pressure on the White House to make sure President Obama expresses his concern about human rights in Azerbaijan. Also other pressure should be out there to stop these particular violations.  Frankly speaking, when I for the first time read about Khadija’s case, I was really shocked about what this government had done to her from the very beginning, and yet it continues humiliating her even while in prison.