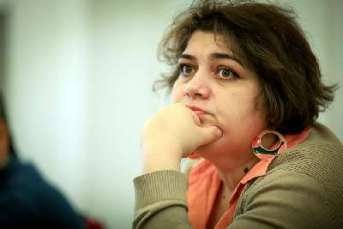 The Commission on Security and Cooperation in Europe, also known as the Helsinki Commission, will hold a hearing on "Azerbaijan’s Persecution of RFE/RL Reporter Khadija Ismayilova” on Wednesday, December 16.

In its statement the Commission noted:

In December 2014 the government of Azerbaijan arrested investigative journalist Khadija Ismayilova on spurious charges and subsequently raided the offices of her employer, U.S.-funded Radio Free Europe/Radio Liberty (RFE/RL).  After a lengthy trial that was widely condemned by the international community for numerous irregularities, in September Ms. Ismayilova was sentenced to 7.5 years in prison. Her appeal was denied on November 25 and the RFE/RL Baku Bureau has remained shuttered by the Government of Azerbaijan.

As Helsinki Commission Chair Rep. Chris Smith  noted at the time of her sentencing, "[Ms. Ismayilova] is being robbed of her freedom for exposing corruption within the Azerbaijani government. Her arrest last December and the subsequent shutdown of the RFE/RL bureau in Baku were direct attacks on media freedom.”

Ms. Ismayilova is known for her well-documented investigative reports into the wealth of the senior leadership of the Government of Azerbaijan and had suffered harassment from the security services for some time before her arrest.

This hearing will examine the conduct of the trial against Ms. Ismayilova and whether or not the U.S. Government has done all it can to secure her release and to address the closing of the Baku bureau of RFE/RL.

The following witnesses are scheduled to testify: