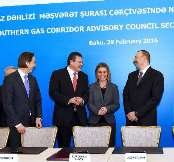 Her visit could have been an important milestone for human rights in Azerbaijan if she had made clear that releasing everyone detained on politically motivated charges is a key EU condition for deeper political and economic ties. But her approach satisfied no one who cares about people’s rights.

Plummeting oil and gas prices have significantly hurt Azerbaijan, which previously had the world’s fastest growing economy thanks to its hydrocarbon wealth. In the current context, the country and its leadership obviously have a lot to gain from increased business relations with the EU.

It’s not like president Ilham Aliyev’s government had a clean human rights record before 2013, but in the last two years there have been systematic and relentless government efforts to crush independent voices.

The government has imprisoned human rights leaders, political critics, bloggers, and the like on politically motivated charges and stifled independent media. Many of those who survived prison decided to leave the country.

While there has been a rollback against human rights in many countries in the region, the crackdown in Azerbaijan is remarkable because it has been so swift and thorough.

However, during her two-day visit to the capital, Baku, last week Mogherini only made a few vague public comments referring to rights, giving a strong impression that one of Europe’s harshest crackdowns on civil liberties is not an EU priority.

She spoke generally of "the high importance that the European Union attaches to the respect for human rights.” She also said that during her meeting with Aliyev she had "referred to a number of individuals presently in jail.”

But she had said the day before that "differences will remain between us in some areas…. If differences are normal, we must keep in mind that our shared interests exceed by far our differences.”

The concern is that this is the only message on human rights the Azerbaijani leadership took from Mogherini’s visit.

Among those behind bars are Rasul Jafarov, a human rights campaigner who was sentenced last year to more than six years in prison.

A leading investigative journalist, Khadija Ismayilova, who exposed corruption by high-ranking government officials, was sentenced in September to seven and a half years of prison.

Ilgar Mammadov, a prominent political analyst, was arrested in 2013 after he announced he would challenge Aliyev in the October 2013 elections and was sentenced to seven years later that year after a grossly unfair trial.

On the same day, the opposition political leader Tofiq Yagublu was sentenced to seven and a half years. And the list goes on.

Leyla Yunus, one of Azerbaijan’s most outspoken human rights defenders, and her husband, Arif, were sentenced in August 2015 to multiple years in prison on spurious charges.

They were transferred to house arrest at the end of 2015, but their luck stops there. Both had serious health problems that worsened during their time in prison. The authorities have refused to allow them to leave the country to get much-needed treatment abroad.

Activists who are not in jail or have not fled the country are being threatened by Azerbaijan’s NGO laws - among the most restrictive in Europe - which effectively block access to foreign funding and allows the government to excessively interfere with their work.

In December, the Council of Europe’s secretary general opened a rare inquiry into Azerbaijan’s failure to carry out the European Court of Human Rights’ rulings.

The European Parliament adopted, last September, a resolution calling for the negotiations for a Strategic Partnership Agreement with Azerbaijan to "be immediately put on hold as long the government fails to take concrete steps in advancing respect for universal human rights.”

You would expect no less from the EU’s highest diplomat.

If human rights are truly at the center of the EU’s foreign policy, as set out in black and white in key EU documents, then what mandate does she have to ignore this?

Just three years ago, Azerbaijan’s disrespect for fundamental rights was still a good enough reason for the European Union to question the enhanced cooperation sought by Aliyev.

But now the message he received from the EU could not be clearer: the politically motivated detentions of dozens of critics and rights activists and the government’s blatant disregard for freedom of expression and association are just "normal differences.”

They’re certainly not a problem for business as usual.

One can’t help thinking that Azerbaijani activists might have seen in Mogherini’s visit proof that the EU disregards their fate as a marginal issue.

EU diplomats in Baku will have to explain to unjustly imprisoned activists and their families how come Mogherini’s private chat with Alyiev and her boiler plate remarks was the best that Europe could do.