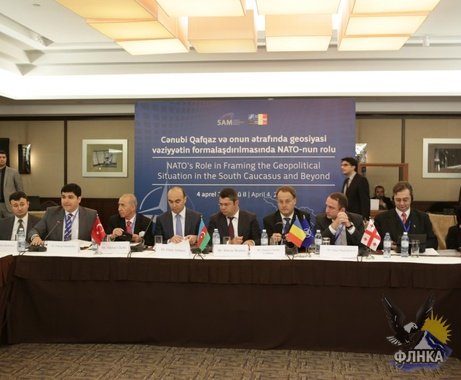 Azerbaijan-NATO relations have a long history and Azerbaijani servicemen have turned into active NATO peacekeepers, Presidential Administration official Elnur Aslanov told a conference on the alliance's role in shaping the geopolitical situation in the South Caucasus, held in Baku on Thursday.

According to Aslanov, the Presidential Administration's Political Analysis and Information Provision Department Head, the relations between Azerbaijan and NATO have been developing dynamically and expanding the relations with NATO is currently one of the priorities of Azerbaijan's foreign policy.

Aslanov said Azerbaijan is interested in bringing its army into compliance with NATO standards.

He noted that about 2,200 sick and wounded people were taken from Afghanistan through the Azerbaijani territory in January-August 2012.

The Presidential Administration official also said the share of Azerbaijan in the economy of the South Caucasus region is 70 percent.

According to a report of the World Economic Forum, Azerbaijan ranks 46th in the world and first in the Commonwealth of Independent States on competitiveness.

"This shows that economic development plays an important role in the shaping of Azerbaijani foreign policy," Aslanov said and added that Azerbaijan has turned from an aid-receiving into a donor country.

According to Aslanov, there is a problem which is the main obstacle to the development of Azerbaijan and the region as a whole. "This is the Armenian-Azerbaijani conflict, which has remained unresolved for a long time," he said.

"The lack of an unambiguous assessment of Armenia's aggressive policy by the world community, international organizations and the silence on this issue has led to the fact that the conflict remains unresolved. This poses a serious threat to the stability and security of the region. Armenia's aggressive policy is a barrier, cancerous tumor in the development of the region," Aslanov underscored.

According to Aslanov, one of the most important issues in the development of Azerbaijan and the region as a whole is the implementation of the projects on new energy and transport corridors.

Aslanov added that Azerbaijan and Georgia are closely cooperating with the international community on this issue.

"However, Armenia is sidelined from these projects because of its aggressive policy and a non-constructive position," he said.

Furthermore, one of the most important factors is interstate integration and Azerbaijan pays special attention to this issue, Aslanov said.

"However, without abandoning its aggressive policy, Armenia stays away from this integration process," he added.

He said Azerbaijan is in very close friendship and partnership relations with its other neighbor in the South Caucasus, Georgia, and is interested in further development of these relations.

Speaking at the conference, Turkish former Foreign Minister Hikmet Cetin said that the nationalist programs implemented by Armenia isolate it from the programs on the development of the region. Today the Armenian people should consider this issue. Resolving the Nagorno-Karabakh conflict will open up numerous opportunities for the development of Armenia and the entire region, Cetin said.

"The Nagorno-Karabakh conflict is one of the most serious problems in the region after the Cold War," he said. "This problem has a long history that has remained from the Soviet Union period. Nagorno-Karabakh is Azerbaijan's integral part."

Cetin said that the conflict must be resolved under international law. "At present, while offering new ideas, Turkey wants to revive this process," he added.

Armenia and Azerbaijan fought a lengthy war in the early 1990s. Armenian armed forces have since occupied over 20 percent of Azerbaijan's internationally recognized territory, including Nagorno-Karabakh and seven adjacent regions. The UN Security Council has adopted four resolutions on Armenia's withdrawal from the Azerbaijani territory, but they have not been enforced to this day.

A precarious cease-fire was signed in 1994. However, Armenian armed forces commit armistice breaches on the frontline almost every day.

Russia, France and the U.S. -- co-chairs of the OSCE Minsk Group -- are mediating peace negotiations. Peace talks have been mostly fruitless so far.

Addressing the conference, Ambassador Ciobanu said that Azerbaijan's cooperation with NATO is at a high level and the alliance urges Azerbaijan to bring its military to NATO standards.

Ciobanu said several projects are planned to be implemented to further intensify the military cooperation between Azerbaijan and NATO.

"Baku is interested in cooperation with NATO," Ciobanu said. "NATO also supports and will support Azerbaijan by its projects in the military sphere."

According to Ciobanu, cooperation between Azerbaijan and NATO is successfully continuing, which indicates the successful integration of the country into the Euro-Atlantic organization.

"The calls for ensuring security, including cyber security and the fight against terrorism, are the most important issues within NATO," he said. "In this regard Azerbaijan has established very active cooperation with NATO."

The conference participants also discussed the contribution of the South Caucasus countries to the NATO mission, public safety interests, defense-related and other issues at the "NATO-Azerbaijan: towards future cooperation" panel.

The sides analyzed the approaches of the U.S. and the European Union to the theme during the second part of the event entitled "Long-term regional conflicts: the expectations and prospects of Azerbaijan".