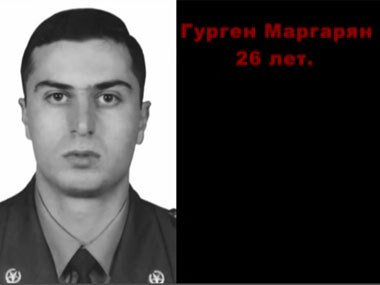 Tomorrow, on February 19, is the 10th anniversary of the day when during the NATO courses held in Budapest, Hungary, Armenian officer Gurgen Margaryan was murdered. The criminal, officer of Azerbaijani Armed Forces Ramil Safarov, who was participating in the same courses, stroke 16 times sleeping Margaryan at night by an ax bought beforehand. On April 13, 2006 the Hungarian court sentenced the killer to life imprisonment without a clemency petition right to be received during the first 30 years.

To the 10th anniversary of Gurgen Margaryan’s murder in the frameworks of "Ordinary Genocide" project a video-footages has been prepared called "Azerbaijan: Racism has no borders." The footage is in English and Russian. It concisely presents the history of the murder that had stunned the world, as well as the programs following the incident and glorification of Safarov in Azerbaijan.

It is significant that the authors chose Symphony number 7 ("Leningrad") by Dmitri Shostakovich known as "the invasion of the Nazis" as a soundtrack for the footage.

In the upcoming days the Hungarian version of the video will appear in the web will.

The "Ordinary Genocide" project is being implemented by the Information and Public Relations Center under the RA President’s administration.

The news about the extradition of Ramil Safarov to his homeland and pardon by the Azerbaijani president Ilham Aliyev broke out on August 31, in 2012. Because of Safarov’s extradition to Azerbaijan the president of Armenia Serzh Sargsyan announced the suspension of diplomatic relations with Hungary. Safarov’s extradition, pardon, and glorification in Azerbaijan was condemned by the US president Barack Obama, US State Department, Ministries of Foreign Affairs of Russia and France, Secretary General of Council of Europe, Secretary General of CSTO, NATO, and international human rights organizations. In addition to that, European Parliament adopted a condemning resolution.