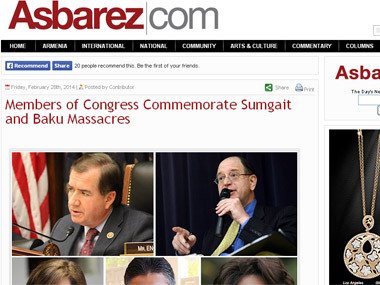 House Foreign Affairs Committee Chairman of U.S Congress Ed Royce as well as members of House of Representatives Brad Sherman, Tony Cardenas, Anna Eshoo and Katherine Clark commemorated the victims of the pogroms against the Armenian population of Sumgait, and condemned the ongoing policy of violence and intimidation conducted by the Azerbaijani regime, reports newspaper Asbarez citing American Committee of "Hay Dat” (ANCA).

As Ed Royce noted 26 years ago the gangs of thugs attacked the Armenian residents of Azerbaijani city of Sumgait and brutally killed hundreds of Armenians.

"On this tragic anniversary, when we mourn the loss of those innocent lives, we are mindful of the ongoing conflict in Nagorno-Karabakh and recurrent incidents of inciting rhetoric by Azerbaijani political leaders and continued military clashes along the border. It is critical that Azerbaijan’s leaders refrain from provocative statements and commit to fruitful negotiations for a lasting peace in Nagorno-Karabakh,” the congressman said.

Brad Sherman noted that "if we hope to stop future massacres, we must acknowledge these horrific events and ensure they do not happen again.”

"Recognizing the ethnic-cleansing of the Armenians from Azerbaijan is an important step. However, we need to do more–we need to demonstrate to Azerbaijan that the United States is committed to peace and to the protection of Artsakh from coercion.”

Congressman Cardenas stressed that the inaction of Azerbaijani authorities together with the U.S. inability to force them to take action have led to the emergence of wave of hatred against Armenians in Azerbaijan. Azerbaijani armed forces continue to violate ceasefire, while Ramil Safarov who beheaded Armenian officer Gurgen Margaryan with an axe returned home as a hero and stands as "an example of patriotism” for Azerbaijani youth.

According to Anna Eshoo without the recognition and condemnation from U.S. the violence will continue.
On 26-29 February 1988 in terms of actual complicity of local authorities and inaction of the USSR government mass pogroms of civilians were organized in Sumgait city of Azerbaijani SSR, accompanied with unprecedented brutal murders, violence and pillaging against the Armenian population of the city. Armenian pogroms in Sumgait were carefully organized. At the meetings, which began on February 26 in the central square, city leaders openly called for violence against the Armenians.

On February 27 protests which were attended by hundreds of rioters turned into violence. Armed with axes, knives, specially sharpened rebar, rocks and cans of gasoline and with the pre-compiled lists of apartments where Armenians lived the rioters broke into the houses, turning everything upside down there and killing the owners. In the same time, people were often taken out to the streets or to the courtyard for jeering at them publicly. After painful humiliations and torture the victims were doused with gasoline and burnt alive. On February 29 army troops entered Sumgait but without an order to intervene. Only in the evening, when the mad crowd began to attack the soldiers the military units took up decisive steps.

The exact number of victims of Sumgait pogroms is still unknown. According to official data, 27 Armenians were killed; however there is ample evidence that several hundred Armenians have been killed in the city in three days. There is also evidence that the riots were coordinated by the Azerbaijani KGB. Executioners of Sumgait were subsequently declared as national heroes of Azerbaijan.