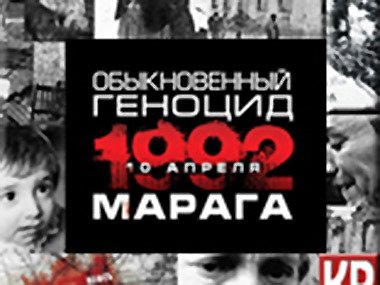 Exactly 22 years ago, the Azerbaijani troops attacked the Armenian village of Maragha located in Nagorno Karabakh. Here, the Azerbaijani soldier massacred over 100 civilians, more than fifty people were taken hostage, half of them were killed in captivity, the fate of some of them is still unknown. If the Self-Defense Forces did not provide the retreat of most of the villagers, the scale of the tragedy would have been much more serious. "Maragha is a modern Golgotha, only many times worse." That’s how Baroness Caroline Cox characterized the monstrous massacre of Armenians in Maragha.

On April 10, in 1992, the regular army units of Azerbaijan invaded Maragha, a peaceful village in Karabakh, from the Azerbaijani Mir-Bashir (now Tartar) village side. Initially, despite the artillery shelling the Armenian militiaman were holding back the pressure of the Azerbaijani military units, but later, when the armored vehicles attacked, they were forced to withdraw, as far as they did not have anything except for light small arms. Militia provided the retreat of the majority of the villagers. Those people who did not manage or did not want to leave their homes were brutally killed by Azerbaijani military.

Names of only 45 villagers killed by Azerbaijani soldiers in Maragha are known, however the overall number of the death toll reaches one hundred, including 30 women. More than 40 people were injured. 30 hostages captured by the Azerbaijani military were killed. Village of Maragha is still under the control of Azerbaijan.

Documentary "Maragha, April 10, 1992. Ordinary Genocide” highlights a number of facts that prove that Azerbaijan had several reasons for its desire of getting that village at all costs, the most important of which was its oil interests and aggressive Armenophobia of the Azerbaijani authorities.

Baroness Caroline Cox, who visited Maragha two days after the tragedy, later told the newspaper "Golos Armenii": "It is impossible to describe what we saw there. The footage taken in those days in Maragha, carries evidence about massacres that occurred here: decapitated and dismembered bodies, remains of children, bloody land and parts of bodies in those places where the Azerbaijanis sawed the living. We saw sharp sickles covered with caked blood which were used to dismember the people... Thus, killing the residents of Maragha the Azerbaijanis then looted and burnt the village."

The second most important factor that played a fateful role in the destiny of the inhabitants of Maragha, became the aggressive Armenophobia, which has served a basis for the state ideology of Azerbaijani government, since its creation in 1918, up to this day. Azerbaijani OMON detachments, which entered the village only due to the bribed officer-tankmen of former Soviet army, had another purpose besides occupying Maragha, which were – to massacre the Armenians in the cruelest, inhuman and barbaric methods. It’s not by chance that the eyewitnesses say that in the ranks of the Azerbaijani military units there were special people, armed with scimitar - the main weapon of Turkish hangmen which they used during the Armenian Genocide in the early 20th century. Their task was not simply to kill, but to slaughter, decapitate, dismember and to leave cross-shaped wounds on both the dead bodies and on those that were still alive.

According to the villagers, Maragha was especially massively attacked on February 26, in 1992; however the attack was repulsed by the self-defense detachments. There is no doubt that the massacre that took place on April 10 was planned precisely on February 26, when near Aghdam another offense of gross indecency was committed by Azerbaijan, but this time it was committed against their own countrymen, who had left Khojalu through Humanitarian corridor left open by the Armenians. After shooting the retreating inhabitants of Khojalu in favor of domestic political purposes and trying deal shortly with the civilians of Maragha under the guise of "Khojalu", the political forces of Azerbaijan pursued one strategic objective, that is discrediting the centuries-old image and reputation of the Armenians as a carrier of world’s civilization and the spread of Armenophobia throughout the whole world.