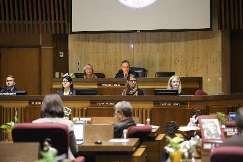 Arizona State Senate adopted a resolution on Feb. 25, 2015 recognizing and condemning the Khojaly Genocide, which was committed by Armenia against the Azerbaijani civilians in 1992.

The resolution was presented to Azerbaijan’s Consul General in Los Angeles Nasimi Aghayev, who was present at the Senate Floor Session.

The document further states: "The Human Rights Watch called it the "largest massacre in the conflict”; major United States and international news organizations reported about the killings with horror; and numerous governments around the world as well as State Legislatures passed resolutions condemning the attack”.

The resolution mentions that the "perpetrators of this carnage are still at large and have not been brought to justice yet”.

It also mentions that "resolutions condemning the occupation of Azerbaijan’s territory by Armenian forces have been passed by the United Nations Security Council and the General Assembly”.

* On the night from 25 to 26 February 1992, the Armenian military units with the support of the 366th Motorized Rifle Regiment of Russia stationed in Khankendi occupied the Azerbaijani town of Khojaly in Nagorno-Karabakh. They killed more than 600 civilians, wounded about one thousand and took hostage more than 1,200 people.