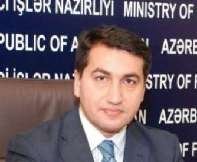 The resolution was adopted on the initiative of certain circles in the European Parliament under the influence of Armenia and the Armenian lobby. The use of the expression "Armenian genocide" in the document is an attempt to falsify history and use it for political purposes.

In the comments Hajiyev also points to the contemplative attitude of the European Parliament to the facts of massacre of Azerbaijanis committed by Armenian Dashnaks in Baku and other regions of Azerbaijan in March 1918, aggression and occupation of Azerbaijani lands by Armenia, ethnic cleansing of Azerbaijanis in Khojaly and the occupied territories.

"The resolution of the European Parliament on 15 April 2015 supports groundless claims of Armenia and contributes to increased tensions in the region," noted further Hajiyev.

In turn, the Assistant to the President of Azerbaijan on socio-political issues Ali Hasanov called the resolution of the European Parliament "the most shameful and politicized decision in the history of this structure, which does not reflect reality and distorts the real history."

In the view of Hasanov, "the resolution proceeds from anti-Muslim and anti- Turk sentiment."

He sees the document full of double standards and anti-Islam phobia, as it happens in most of the international organizations created on the initiative of the West.

Note that when the Pope earlier called the events of 1915 the first genocide of the 20th century, the Azerbaijani authorities paid no attention to this fact, perhaps because the Heydar Aliyev Foundation provides substantial financial assistance to the Vatican.