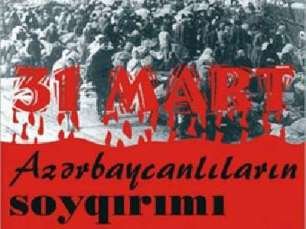 Today Azerbaijan observes Genocide Day. On March 31, 1918, bandit gangs of the Armenian revolutionary Dashnaktsutyun party, through support of the Bolshevik administration of the Baku commune, massacred civilians in the Turkish quarters. Azerbaijani civilians were killed under the pretext of a struggle against the counter-revolution. Around 12,000 people died during the barbarian action.

The attacks in Baku took place from March 30 to April 2. During this period around 50,000 people were killed in the city and its outlying towns and villages. Mosques, schools and places of architecture were also destroyed.

Stepan Shaumian, chairman of the Revolutionary Defense Committee in Baku, led the massacre of the city’s Muslim population. Colonel Avetisian, member of the Dashnak party, was chief of the Red Army headquarters in Baku.

Following the ethnic cleansing in Baku, the annihilation of civilians continued in Shamakha, Guba and other regions of Azerbaijan.

The security of the people was safeguarded only after the establishment of the Caucasian Islamic party on September 15.

A new wave of ethnic cleansing began at the end of the 1980s when tens of thousands of Azerbaijanis were killed and wounded during the Armenian aggression and hundreds of thousands of people became refugees.