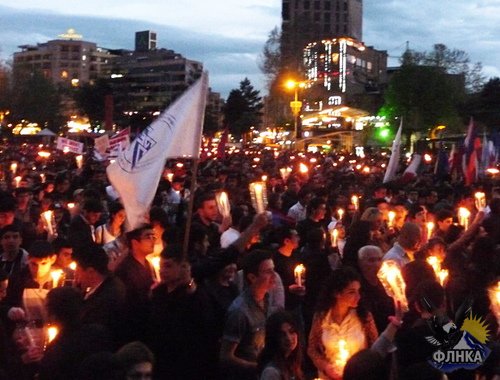 In his speech, Kiro Manoyan, the head of the office of "Ai Dat", has noted that in future, the Armenian people will be demanding to restore justice. He has criticized the statement made by Prime Minister Recep Tayyip Erdogan, who expressed his condolences to the descendants of Armenians.

"He expresses the condolences not about crime, but about the victims, as if they died during an earthquake," Kiro Manoyan has said.

Karen Avakyan, a coordinator of the Youth Foundation of Armenia, has stated that "the compensation, the restitution of lands and the very recognition of the Armenian Genocide by Turkey are integral parts of the restoration of justice." He has also expressed the hope that by the 100th anniversary of the Armenian Genocide, the number of countries, which recognize the genocide, will increase.