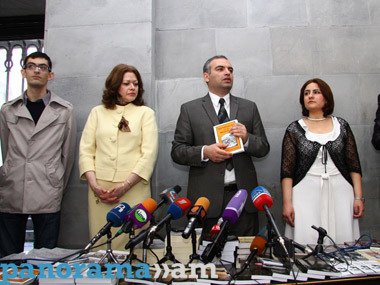 The Armenian Genocide Museum-Institute (AGMI) will continue to present the true history not only through the permanent exhibition but also in exhibition halls of large world capitals, AGMI Director Hayk Demoyan told a news conference on Tuesday. Demoyan stressed the importance of the exhibitions held in the hall of the Catholic Church of Beirut and in Copenhagen Royal Library last year.

“These exhibitions triggered a response from the Turkish embassy, which led to a harsh response by the Danish public. About 250 critical articles were published in Denmark. The key thesis was that Turkey has no right to voice an opinion denying the Armenian Genocide in Denmark,” Demoyan said.

Demoyan said that AGMI is planning to sign a number of agreements including with the Canadian Museum of Human Rights.

“We pretend to become a big research center that will carry out researches not only on the Armenian Genocide but also on genocide studies in general,” he said.

The AGMI Director added that famous genocide scholar, editor-in-chief of the Encyclopedia of Genocide Israel W. Charny has donated his personal library to the Armenian Genocide Museum-Institute.