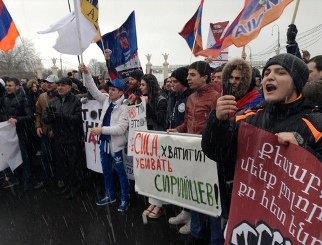 Moscow hosted an action of solidarity with Armenians from the Syrian city of Kesab and the people of this country in general. The participants condemned the international terrorism, accused the Turkish authorities of aiding the Syrian opposition and supported the position of Russia and Armenia in the Syrian conflict. The action was held by the public organization "Russian-Armenian Commonwealth" and the Moscow Association of Armenian Youth, and was attended by over 300 people, the "Caucasian Knot" correspondent reports.

Yuri Navoyan, the head of the above Commonwealth, noted that after the events in Kesab and surrounding villages, several countries spoke against the use of force against the civilian Armenian population.

Lieutenant-General Norat Ter-Grigoryants, who took part in the action, has treated the events in Kesab as "a purely military operation." The non-recognition of the Armenian Genocide of 1915-1923 by the world community, has led, according to Ter-Grigoryants, to appearance of leaders, who continue the genocide around the world. He demanded to bring Turkey's top leadership to responsibility for the events in Syria.

According to Arut Mnatsakanyan, an expert of the analytical edition "Time to Analyze", "the West and the United States would not notice that Christians are killed in the Middle East."

The audience called on the Russian government to provide humanitarian aid to the deported civilians of Kesab.