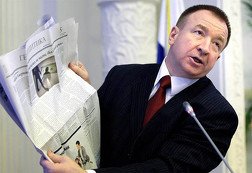 Yerevan hosted the international conference of the CSTO: the CSTO and Security of Eurasia. The coordinator of the CSTO Analysis Association which includes 25 information analysis and sociological structures, Igor Panarin, says that the association pays serious attention to the ideological content of the CSTO activity. The U.S., the UK, and other allies in NATO spend huge resources on propaganda of their ideology, including on the territory of the CIS. And the problem of similar instruments becomes a priority for the CSTO. Panarin states that young people from countries which are members of the organization will be annually gathered and informed of the problems and challenges in the security sphere, which the CSTO faces. The first forum will take place in Yekaterinburg in early 2014. This year Russian analysts will travel to Yerevan to hold several meetings with students of leading Armenian universities. Therefore, according to Panarin, along with providing security and defense of the members, the CSTO intends to improve the ideological component of its work seriously.
The chairman of the social organization Integration and Development, Aram Safaryan, says that 82% of the Armenian population think that the main ally and friend of the republic is Russia, believing that the main guarantor of their security is the CSTO. In October a public opinion poll was conducted to detect the preferences of the Armenians toward Russia and the European Union. 67% of Armenians think that cooperation with Russia is priority. The results dispelled myths spread by organizations sponsored by the West about "pro-European attitudes of the Armenians.” The expert states that the Armenians see benefits in integration with Russia in key segments of economy. According to him, discussions over the Customs Union will take opening of the Abkhaz railway to a higher level. "We have to achieve a serious economic growth in the nearest future, and Russia, Belarus, and Kazakhstan are our only market which enables doing this,” Safaryan thinks.

According to preliminary calculations of Russian and Armenian experts who conducted a survey on reasonability of joining the CU in Armenia, membership in the group will give 4-4.5% growth of GDP annually. According to official statistics, 220 thousand labour migrants transferred from Russia to Armenia $1.45 billion which surpass the whole Armenian export. And after signing the agreement on the common economic space, Moscow will elicit quotas and licenses for Armenian labour migrants.

The head of the Noravank Fund, Gagik Arutyunyan, thinks that socialist ideology in integration processes in Eurasia should be implemented. He says that Armenia tries to forget its socialist past, forgetting about all advantages of the USSR. At the same time, China successfully use the formula which combines socialism, liberalism, and conservatism.

Bordyuzha said the sale of Russian weapons to Azerbaijan