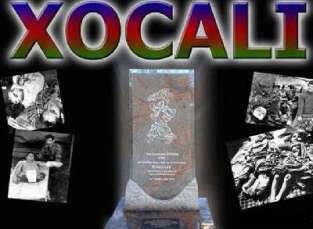 Mourning events dedicated to the 23rd anniversary of the massacre in Khojaly on 25-26 February 1992 in Nagorno-Karabakh are taking place in  recent days, in many parts of the world. The events were organized by the Embassy of Azerbaijan, Diaspora organizations and  Azerbaijanis living or studying  abroad. The essence of these events  is  to draw attention to the fact of the massacres of civilians which have not received until now the international legal assessment.

Certain work has  been done in recent years in this area,  and is now the world community is much better informed about this fact,  which Azerbaijan  regards an act of genocide. Traditionally, February 25-26 in Azerbaijan is marked as mourning date.

On February 26 the country's leadership, public and political figures, members of parliament laid flowers at the monument to the victims of Khojaly genocide in Baku.

* On the night of February 26, the Armenian armed forces in Nagorno-Karabakh  with active support of armored vehicles and personnel of the 366-th Russian motorized infantry regiment stationed in Khankendi occupied  the second largest settlement of Azerbaijan in Karabakh.  Then 613 civilians were killed.