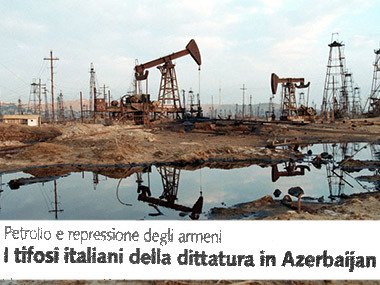 Luciano Capone, a columnist of a prestigious Italian newspaper Libero in today’s issue touches upon the "caviar diplomacy” carried out in Italy by Azerbaijani petrodollars and the results of that diplomacy. He concludes that Italy by its behavior legitimizes one of the most authoritarian regimes of the world which besides violating elementary rights of its citizens threatens neighboring Armenia and Nagorno Karabakh.

"Oil and repression of Armenians: Italian "tifosi” (fans) of the dictatorship in Azerbaijan” article by Luciano Capone is presented below.

"Azerbaijan is a country in the Caucasus that since the collapse of the Soviet Union, for more than twenty years, has been ruled by the Aliyev dynasty: for 10 years the patriarch, Heyder Aliyev, has been the president and founder of the dynasty, then in 2003 his son Ilham became president and is now ruling for his third consecutive presidential term.

Azerbaijan is one of the most authoritarian states in the world, as it stands on the lowest ranks of any international index on economic, political or press freedom. It is a despotic regime that should be isolated because of the systematic violations of the most elementary rights.

Still, the kingdom of Aliyev is not as isolated as it deserves to be, because the country is rich in oil and gas. Italy, in particular, has a special relationship: it is the largest trading partner and has just signed an agreement for the construction of Tap, a pipeline that will connect the Caucasian republic to Apulia (southern Italy).

But in addition to economic relations, Azeris are very active with their petrodollars in Europe and in Italy, in their efforts to hide the authoritarian nature of the government and to establish a positive and democratic image of the regime.

The ESI (European Stability Initiative) has coined this activity as "caviar diplomacy" and has addressed the matter in several reports starting from 2012. The last one was released in November 2013 and was entitled "Azerbaijan and the end of election monitoring as we know it". Names of pro-Azerbaijani Italian politicians, among others, appear in the report. For instance, the MEP Fiorello Provera of Lega Nord Party voted against the resolution of the European Parliament condemning the government of Azerbaijan for the arrest of two bloggers. Another politician of Lega Nord, Senator Sergio Divina (ed. Head of Italy-Azerbaijan Friendship Group), said he was pleased with the involvement of women in politics during the last presidential elections in Azerbaijan even if all the candidates were male. The report displays the name of Pino Arlacchi (formerly PDS, IDV and now Socialist MEP) as well. As head of the European Parliament's monitoring mission for ensuring the regularity of the Azerbaijani presidential elections, which OSCE defined as irregular, Arlacchi stated that the elections that reconfirmed Ilham Aliyev with almost 85% of the votes were "free, fair and transparent".

Finally, among Italians committed to spread the thesis shared by the Azerbaijani government, it is worth mentioning the work of the Italian Helsinki Committee, led by Antonio Stango, a member of Radical Party. During the last months, the Italian Helsinki Committee was quite dedicated in the promotion of Azeri interests, as it recently organized a meeting on "Khojaly massacre", a tragic episode of the Nagorno -Karabakh war, which saw the small Armenian-Christian enclave to struggle for independence against Azerbaijan. The story of the massacre of Khojaly is extremely controversial. Azerbaijan accuses the Armenians, while, according to Armenians the responsibility is of the Azerbaijanis. Still, the reconstruction of events should have pleased the Azerbaijani ambassador to Italy to such an extent to feel free to accuse the Armenians of "genocide” for the death of hundreds of civilians. It was an obvious provocation against the Armenians, survivors of the first genocide in history perpetrated by Muslim Turks against them.

While it is correct to defend the Italian economic and energetic interests, but to legitimize a dictatorship that over the past 5 years has increased its military spending by 2.500 % and threatens to attack Armenia and Nagorno Karabakh is too much.”