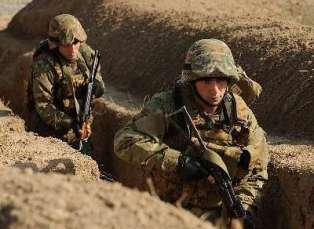 Azerbaijani Defense Ministry press service reported at 13 o'clock on the continuation of the fighting on the front line, the destruction of manpower, military equipment and military infrastructure of the Armenians, which coordinates  have been determined on the front and rear of the enemy. Details were not disclosed.

On April 2 at 11 o'clock the Azerbaijani Defense Ministry confirmed the beginning of large-scale fighting along the front lines of Karabakh with the use of artillery. The reason  is that the Armenian side  started  shelling residential areas. In order to prevent  the activity of the enemy and prevent its expansion, command took measures, the report says.

According to the Defense Ministry of Azerbaijan, the most active fighting involving various types of troops are on the line Agdara-Terter, Aghdam, and also in the southern sector - through Khojavend, Fuzuli. No losses are reported.

Armenian Serviceman Tells about Reasons for His Transition to Azerbaijani Side