Armenian Serviceman Tells about Reasons for His Transition to Azerbaijani Side 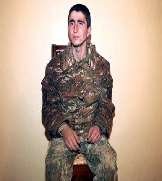 Azerbaijani Defense Ministry reported the details of the transition of an Armenian soldier Andranik Grigoryan to the Azerbaijani side.
According to the press service of the Defense Ministry of Azerbaijan, on March 22 the contract serviceman Andranik Grigoryan left his military unit and voluntarily surrendered to the Azerbaijani side.He said that he was born in Martuni (Khojavend) in 1991.He explained his action, saying he did not want to die "pointlessly". "I'm afraid of senseless death," he said."I'm not the only one to cross the front line. There was another with me, trying to go to your side. I threw the gun and went on my way. His fate is not known. But I think that he is no longer alive," said Grigoryan during the preliminary interrogation.He said that during the senseless organized sabotage by Armenians on March 19 more than 20 people were killed and dozens were injured. According to him, "for lack of soldiers civilians stasnd at checkpoints."Grigoryan told about the "intolerable conditions in Karabakh, the lack of discipline in the army, the lack of weapons and ammunition, food and medicine, the conflict between the local Armenians and Armenians of Armenia, and the bad attitude of the officers to the soldiers and warrant officers. "All this chaos there got me," the press service of Defense Ministry quoted Grigoryan. According to him, many people like him are tired of this life and want to go to the Azerbaijan side."But they do not dare to do this because they do not know what awaits them here. I also thought a long time before I committed this step, but then I decided to surrender voluntarily rather than to stay and wait for my death. Contrary to all my expectations, I was received normally here and fed very well. I want to appeal to my comrades forced to bear arms to say that the Azerbaijanis are not what we were told by our criminal power over the years. Still it is not too late to act like me," said Grigoryan. At present, the safety of the prisoner of war A. Grigoryan is provided and he is treated in the framework of all accepted norms of human rights, said the Defense Ministry of Azerbaijan.The Ministry of Defense has also released video footage of the voluntary surrender of Grigoryan and his interrogation. Recall that on March 19 in the north of Karabakh there was a fight. The separatists reported that three of their soldiers were killed and four were wounded.The Azerbaijani Defense Ministry announced that more than 20 enemies were killed and wounded. From the Azerbaijani side there were no losses.