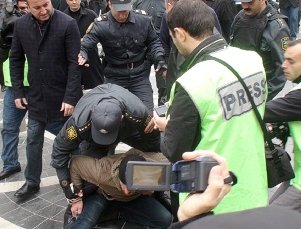 The editorial staff of the on-line edition "Yukselish Namine" (In the Name of Revival), based in the Azerbaijani city of Sumgait, has announced the pressure imposed by local authorities and police on Elchin Gasanov, the deputy editor-in-chief.

Gasanov is also a deputy chairman of the NGO "Legal Enlightenment of Sumgait Youth" and a member of the Majlis of the oppositional Popular Front Party of Azerbaijan (PFPA).

The pressure from the police began after the "Yukselish Namine" published an article about the dissatisfaction of residents of the 10th District of Sumgait with felling trees in the park and plans to build a shopping centre instead, Elchin Gasanov told the "Caucasian Knot" correspondent.

"This was covered not only by myself, but other national media; however, local authorities have an opinion that if anything 'negative' about Sumgait appears in the media, the blame is always on me, because I'm also the deputy chairman of the above NGO and the PFPA," said Gasanov.

According to his story, on April 22 men in plain clothes detained him near his house and took to the Station No. 1 of the Sumgait City Police Department. He was threatened that if he "went on in the same way," they would de him "bad"; then, he was released.

Gasanov said that he had been earlier fined and detained for his journalistic and political activities.