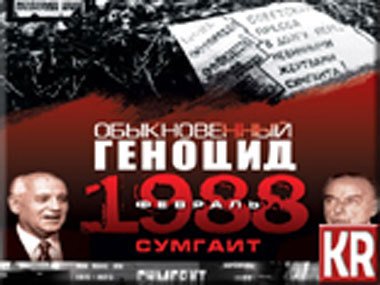 Panorama.am has already reported that in the frameworks of the project "Ordinary Genocide" the second volume of the collection of "Sumgait tragedy: Eyewitness Accounts” is planned to be published. According to the project manager Marina Grigoryan, publication of the second volume is the continuation of the work that was started immediately after the genocide in Sumgait. At that time, under the supervision of Samvel Shahmuradyan, the testimonies of those who had suffered directly, lost relatives and survived through the terrible tragedy were collected and published. The first volume of the collection was published back in 1989; it was translated into nine languages and was re-released last year.

According to Marina Grigoryan, evidences of more than 50 people, written both 25 years ago and recently have been depicted in the second volume. Besides, the collection includes several newspaper articles dedicated to "Sumgait" and published in the Soviet and world press in different years. The book will come out in Russian in late March.

Marina Grigoryan also noted that the third volume is to be prepared; it will include materials of criminal cases on Sumgait events, as well as the indictment of the USSR Prosecutor's Office of Azerbaijan on the case which was being investigated by the Supreme Court of the USSR in October-November 1988.

In connection with the 26th anniversary of the Armenian genocide in Sumgait Panorama.am continues publishing some of the evidences that have been included in the second volume.

Panteley Melikov, a soldier of the Soviet Union Army. Greek by nationality. Born in Tbilisi. He served in Sumgait in February 1988.

It was February 28, Sunday morning, I was on leave, reached town from the unit on foot; there were no buses there. The city was closed; fire-engines and police were on the highways and didn’t allow anyone to enter the city. I moved away from the road and appeared in Sumgait crossing the steppe. At first I went to the post office to make a call, but the mail was exploded, there was nothing left there. Thronged of Azerbaijanis were walking in the city, mostly young people, from 16 to 25 years old, about 100 people or more. They were walking through the streets, the yards, were entering the apartments. Later I learnt that these were the flats of Armenians; we were also told that a day before they had attended Housing and communal service offices and asked for a list of apartments were the Armenians lived. Basically, there was no one in these apartments, but if they found someone, they killed him.

That day I saw both killings and slaughters... Near the market, in front of my eyes, they caught an Armenian girl, 16-17 years old.
They raped her just on the street - 4 people, then they cut her into pieces with a knife. Seeing this, I approached them to intervene but got a hit, they broke my jaw and beat me quite well. I saw how they killed an Armenian woman on the street; she was 58-60 years old. She was cut by knives by several people, I was 15 meters far, standing, unable to do anything. I saw by my own eyes how the crowd stopped the car in which there were two Azerbaijanis sitting and under the pretext that they do not help them, it means they are on the Armenians’ side, killed them. The Azerbaijanis killed Azerbaijanis. I saw also other Azerbaijanis who refused to participate in pogroms for which they were beaten and killed. One climbed up a tree to escape the crowds. He was killed right on the tree for refusing to show where the Armenians lived.

On that day, on the 28th, they did not touch the soldiers yet; I didn’t see any military man that day in the streets. But on the 29th they started to attack the soldiers too.

- Did the pogrom-makers wear other weapons besides the cold weapons?
- They had the same weapons, as we – guns, handguns and even hunting rifles or homemade guns. They were not like a crowd; their actions were organized.

(...) I do not know how exactly they were killing Armenians, but there were a lot of people murdered brutally. Guys even compared these events with the movie "Ordinary Fascism", which was recently shown; they were saying that the killings in Sumgait were very similar to what was described in the movie. The police did not intervene; those who were trying to stop them on the first day were killed. Many police officers were going along with the crowd; I saw it by my eyes.

- Is it true that in the pogroms only drug addicts and hooligans were involved?

- If you really think so, it means that the entire population in Sumgait consisted of addicts and hooligans, and there were no other people there...

(...) Later it quietened down. Actually, they were expecting that on April 24, in connection with the Armenian Genocide Day the Azerbaijanis will be drive out from Armenia. They were getting ready for this in Sumgait; they declared a war footing, but nothing happened. During all this time we never heard that any Azerbaijani was killed, smashed in Armenia or driven out.

- Can you tell me how many Armenians were killed during those days in Sumgait? Approximately at least?
- I cannot say... But if we take those 2-3 days, it is not 32 it is at least 10 times more. Three hundred people probably.
- Did Armenians defend themselves?

-Only by cold weapons. I saw Armenian taxi drivers who were keeping axes in the trunk - they said if they are attacked they will not surrender that easily. But those who were attacked in their homes at night could do nothing.

- One of the refugee women told me that the Azerbaijanis, under the pretext of protection, were gathering the Armenians in the buses, taking them to the sea and throwing them into the sea. Is that true?

- Yes, it is true. They also were stopping the buses on Sumgait-Baku route, ordering those who were not of Armenian nationality to come out of the bus, and were killing those who remained in the bus. I cleaned those corpses myself; there were mostly women and children, only 7 people, 4 women, three small children. They were stabbed with knives. I saw it by my own eyes. It was 29 Feb. when I first witnessed such an event; we were leaving Nasosni for Baku. Then again on 7-8, and everywhere people were killed by knives. Such killings occurred also on 15, 16 March. I saw how only one Armenian was left in the bus, because very few people were traveling by bus already, everyone knew about the attacks. He was a young man, he was not killed, but they simply set the bus on fire; anyway he survived, though was badly burned...

(...) None of the newspapers wrote the truth about the Sumgait events. The mere fact that they say there were 32 people dead ... I saw that amount of people killed on the first day only. The girl from the program "Position" was right – they will not speak the truth about Sumgait now, but maybe 20-30 years later.

- Everything that you saw happening in Sumgait was similar to genocide?

- It was not similar; in my opinion it can’t be otherwise ... It was exactly genocide.

You can watch the video-footage prepared at the beginning of July 1988 on the site of KarabakhRecords.