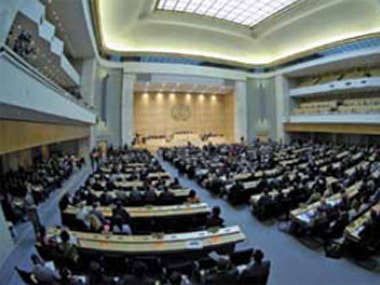 Since its last UN Universal Periodic Review (UPR), Azerbaijan has continued its crackdown on activists and journalists through politically motivated arrests, long pre-trial detentions and imprisonment, the statement of the international human rights organization Article 19 reads.

According to the article published on the site, “Arrests of activists and journalists on spurious charges, including drug possession and possession of illegal weapons, are used as a pretext to detain - and thereby silence - critical voices. The introduction of increased sanctions for those organising or participating in protests, including excessive fines, has also had a debilitating effect on Azerbaijani citizens’ right to express critical or oppositional viewpoints.”

ARTICLE 19 calls on the Azerbaijani authorities to release those arrested or imprisoned for exercising their rights to freedom of expression and assembly and to repeal recent amendments to the Law on Freedom of Assembly to bring it in line with international human rights standards.

According to the statement of the organization after its first Universal Periodic Review (UPR) in May 2009, the Azerbaijani government committed to strengthen its efforts to guarantee freedom of assembly and association, uphold the right to peaceful assembly and ensure that it is effectively implemented, put in place further measures to ensure respect for freedom of expression and the media. “Despite this, Azerbaijan has continued to crack down on activists, social media users and Internet bloggers. Since the start of 2013, civil society in Azerbaijan has been increasingly active ahead of the presidential elections due to take place in October this year. In January 2013, the Azerbaijan government responded harshly to protests in Baku and in the town of Ismailli. The protests were triggered by despondency over corruption and reports of physical abuse in the military.

Protesters were brutally dispersed, many were detained by police, and more than 20 people were heavily fined using amendments to the law on protests introduced in November 2012,” the organization notes.

As the organization stated, since the beginning of March 2013, seven activists from one of the largest political youth movements in Azerbaijan, NIDA, have been arrested in Baku on politically motivated charges.

According to Article 19, these arrests and detentions follow calls for the regulation of social media and the Internet, one of the few spheres where freedom of expression is still possible in Azerbaijan. For example, in March 2013, Siyavush Novruzov, an MP with the ruling Yeni Azerbaycan Party, said that regulations should be imposed on social media to protect citizens’ ‘honour and dignity’.

“Most activists currently in detention use social media and the Internet in order to organise and publicise their activism,” the statement reads.

In the light of these developments, and ahead of its second UPR on 30 April 2013, ARTICLE 19 calls on the Republic of Azerbaijan to repeal the amendments made to the Law on Freedom of Assembly, adopted in November 2012, immediately and unconditionally release all those detained or imprisoned in connection with the exercise of their right to freedom of expression, as well as investigate all reports of ill treatment and/or torture of people in custody and bring those responsible to justice.