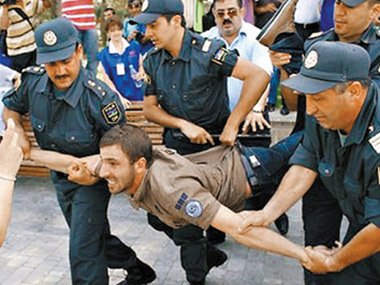 The member states of the United Nations should hold Azerbaijan to account during its Universal Periodic Review (UPR) on 30 April 2013 for its failure to protect basic human rights. The International Partnership Group on Azerbaijan, coordinated by Article 19, and local organizations urge the UN to take Azerbaijan to task for failing to implement the commitments it made after its first review in 2009.

The statement which has been placed on the Reporters Without Borders site says that in its national report to the UPR, Azerbaijan stated that the right to freedom of association and assembly is guaranteed in its Constitution. It also stated that freedom of assembly is further guaranteed through international treaties to which Azerbaijan is party. However, this assertion is at odds with the experiences of the many Azerbaijanis who voice critical or opposing views in the traditional media, online or in protests.

After its first UPR in 2009, the Azerbaijani government committed to implementing several recommendations concerning freedom of expression and the media, the right to peaceful assembly, efforts to guarantee freedom of assembly and association. “Yet journalists, writers, bloggers and human rights defenders and protesters who have expressed critical or opposing opinions have continued to be arrested, detained and/or imprisoned. They are regularly harassed and subject to attacks while carrying out their work,” the statement says.

In recent months, the Azerbaijani government has also introduced several new pieces of legislation that violate international standards, notably amendments to the Law on Assembly and the Law on Non-Governmental Organisations. “These have had a negative impact on Azerbaijan's civil society and its ability to speak out against human rights abuses.”

“We call on the UN member states to use the UPR process as an opportunity to hold Azerbaijan to account for human rights violations. We also urge for them to make strong recommendations in line with the commitments that Azerbaijan has already made under international standards,” the organizations state.

The statement says that the situation for freedom of expression has not improved in Azerbaijan since 2009. Instead there has been a steady deterioration, demonstrating the Azerbaijani authorities' alarming disregard for the principles enshrined in its Constitution and relevant international standards.

“At its first UPR in 2009, Azerbaijan committed to "effectively investigate and prosecute crimes and violations against journalists and human rights defenders" and to punish those responsible. Despite this commitment, physical attacks and threats and the harassment, blackmail, intimidation and imprisonment of journalists, writers, bloggers, human rights defenders and activists have become commonplace,” the document says.

"These arrests send a message to other journalists and opposition politicians to either cease exercising their right to freedom of expression altogether, to self-censor, or risk arrest", states IRFS CEO Emin Huseynov. "Ahead of presidential election in October 2013 the government is seriously redoubling its efforts to stamp out freedom of expression," Huseynov added.