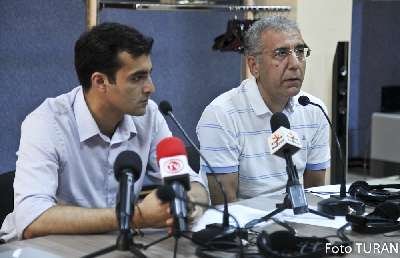 The conference has been organized by local NGOs – the Institute of Reporters Freedom and Safety (IRFS), The Society of Legal Education (SLE), the Human Rights Club (HRC), the “Women for Rational Development” Society jointly with the Norwegian Human Rights Fund and the US National Endowment for Democracy (NED).

Rasul Jafarov, head of HRC, said goal of the conference is to discuss the public campaign to achieve fulfillment of the recommendations of the second Universal Periodic Review adopted by the Human Rights Committee during the discussions in Geneva on April 30, 2013. More than half of the countries of the world provided over 170 recommendations to Azerbaijan, twice more than in the first Review adopted in 2009.

“The human rights situation in Azerbaijan is very complicated. In the past the civil society and international community had hopes that the Azerbaijani government will implement the reforms, but events of the past years dispelled these illusions.

The authorities will never implement the reforms by themselves. Conduct of fair elections, independent media and courts, freedom of assembly and strong civil society will mean end of this power,” said Intigam Aliyev, head of the SLE.

As a result of total attack of the authorities on the civil society institutions in Azerbaijan, several independent NGOs and media are left, activities of political parties is limited, they are deprived of offices and their activists are put to prison.

He believes that the international organizations do not help to prevent destruction of the civil society.

Aliyev said, particularly, one of the conditions of the Baku OSCE office in the civil society projects is a ”constructive cooperation with the government.”

For the Azerbaijani government “constructive cooperation” means turning a blind eye to the human rights violation and claiming that “reforms are going on” in the country.

The OSCE experts’ reports about monitoring of elections, judicial system and freedom of expression have become less critical.

Aliyev has also criticized the recent statement of the US Ambassador Richard Morningstar that he hopes for conduct of fair elections.

Elections cannot be fair, if the country has no freedom of assembly, freedom of press is limited and political activists are suppressed. The US Agency for International Development (USAID) has provided $1.5 million to the pro-governmental coalition NGO.

The UN special rapporteur on freedom of assembly and unions has addressed the participants of the conference via Skype. He had to take part at the conference, but his visa was delivered by mail late and his visit was cancelled.

He believes that the situation of freedom of assembly in Azerbaijan on the eve of elections remains “tense.”

The UN special rapporteur has urged the Azerbaijani authorities to immediately register a local branch of the Norwegian Human Rights House and respect right to unions and register other NGOs.

Kiai has also criticized rise in fines for participation at the peaceful demonstrations.

He said in September 2013 he will make a report about freedom of assembly in the world in the context of elections and include situation in Azerbaijan in it.

He said the government must play a supporting, but not a controlling role in observation of freedom of assembly.

Kiai said that the Azerbaijani government has invited him to visit the country and he will most likely do that in 2014.

Florian Irminger, head of the Geneva-based Norwegian Human Rights House, drew attention to the changing attitude of the world community to the human rights problems in Azerbaijan.

The first Review adopted in 2009 was weak as compared to the second Review adopted in 2013. For instance, in 2009 the US did not make any comments on freedom of assembly and expressed a desire and readiness to cooperate in this area. In the current Review the US emphasized ban on demonstrations in the Baku centre.

Despite a close cooperation in the oil and gas industry, the UK has also made a critical statement.

Irminger said that the Azerbaijani authorities did not say at the session in Geneva that they refuse to fulfill the recommendations.

In September 2013 the Azeri government must respond to the UN Human Rights Committee concerning the commitments it is going undertake before the elections.

He believes that if there is no progress, the attitude of the world community will keep changing.

Emin Huseynov, Director of IRFS, said the civil society of the country must demand fulfillment of recommendations of the Review. “We will translate the document into Azeri and send to chiefs of the police stations, judges and other officials, so they would fulfill the recommendations in practice,” he added.

Shakhla Ismayil, head of the Female for Rational Development Society, said that despite reduction of number of activists of the civil society, efficiency of their activity has improved.

“The embassies and local offices of international organizations may not respond to the human rights problems efficiently. But our cooperation with the international human rights organizations helped to draw attention to the problems in Azerbaijan in the world and including over 170 recommendations into the second Review proved that. We must continue efforts in this direction,” Ismayil said.