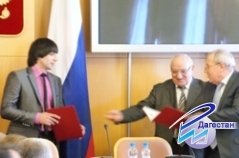 Makhachkala, May 5, 2011. The Interregional Conference of the Federal lezghian ethno-cultural autonomy, on the topic: "The role of public institutions in the normalization of interethnic and interfaith relations, patriotic, spiritual and moral education of youth" was held April 29 in Tyumen.

The event was prepared and organized as the conference of Lezghian communities and social organizations of Tyumen, Chelyabinsk, Sverdlovsk, Kurgan region, Krasnoyarski Kray, Khanty-Mansi and Yamal-Nenets autonomous districts. Tyumen authorities were represented by the Chairman of Committee for Nationalities of Tyumen region Evgeny Vorobiev, his deputy, Victor Khomenko, the deputy chief of public security police Adam Bogdanovich. The Federal Lezgian national-cultural autonomy was represented by its President Arif Kerimov, the vice president of FLECA Sabir Mammadov, Major General of the Internal Troops RF Eminov Tahir and the FLECA member, director of the "Monolitholding" company Mamed Abbasov.

The meeting participants considered the role of public institutions in normalization of interethnic and interfaith relations, patriotic, spiritual and moral education of youth, the issues of consolidation of regional communities of Lezgian people, the questions of spiritual and moral education of Lezgian youth and the problems of interaction among the regional offices of FLECA and the public authorities and civil society institutions. Among the main topics for discussion there were issues of harmonization and normalization of interethnic and interfaith relations.

"The Russian Federation Government is working out a Federal program aimed at strengthening the unity of the Russia’s nationalities and boosting the ethno-cultural development in Russia. The federal target program will be designed to strengthen the unity of the Russian nation jointly with the federal national-cultural autonomies” - the deputy director of the International Relations Department of the Ministry for Regional Development RF Alexei Zenko in particular said.